When it comes to race, gender, and identity, the conversation has only just begun. Humans aren’t very good at seeing it from one another’s point of view, let alone figuring out a way we can all live together. We are walking into the wind, only a few of us holding hands.

Live theater, for those who partake, is one of the few “safe” places in which this conversation can be pushed, showing the way into these other points of view. But it’s more than just that — theater taps into the special attention we give to something happening live in front of us. Even as our minds work to digest and examine, we are as physically present as the actors on the stage.

This defining facet of the theater experience is at the heart of Jackie Sibblies Drury’s Fairview (★★★☆☆), a clever but unsettling study of race relations. Using performance, she draws us — sometimes insidiously, sometimes jarringly — through four successive layers of theater, starting with what seems to represent an African-American sitcom and evolving into something much more visceral and almost surreal. Her goal — which is no secret — is to challenge a white audience to recognize and ultimately feel the African-American experience of being forever under scrutiny, forever judged by the good-intentioned, the ignorant, and the awful.

Theatrically and intellectually, her infrastructure is, without doubt, powerful and original. It is the kind of thing that has you saying “wow” days after, as you reflect on the ingeniousness of the concept and the crafting. But — and there is a but — the question must always be: What does this play offer? And here the answer is much thornier.

If Drury’s goal is to push white audiences out of their comfort zone, then she gets the job done. There is the subtle and accurate capturing of the easy way people slip into racism and an oblique but increasingly powerful message that white people will never understand what it means to be exposed and on display as black Americans experience it. By the end of the play, Drury has drawn exceedingly uncomfortable, seemingly impossible, lines. She offers no roadmap, no way forward. In that respect, the piece unapologetically touches a nerve in a raw and original way.

But once the dust has settled, the play raises pointed questions. If you are going to turn a vicious eye on the white members of your audience on the premise of unfair societal scrutiny, how do you reconcile the many sub-groups? For starters, what of women and the “gazes” they endure? What of those who have suffered sexual abuse, those in the gay and trans community who may have been ridiculed and brutalized, or Jews whose grandparents were lined up to be shot? Do they need or deserve to get an extra “opportunity” to feel what it’s like to be scrutinized? What, if any, value should be assigned to these other human experiences? Has Drury created a context that allows her to ignore them?

The other conundrum here is her use of humor, which charges headlong into the current debate on what is and isn’t acceptable in comedy and as offered by whom. In creating the genuinely funny character of Jasmine and then later suggesting that the (presumably) white audience has no place to laugh, Drury adds nothing to the conversation. The fact that blacks and whites in the audience are laughing together fails to interest her.

And then there is the wider, far less exciting reality of who her audience really is, versus who they should be. This work should be performed in locales where it will (hopefully) change hearts and minds. But the truth is that most people who will pay to see this play will already have spent some amount of time sensitizing themselves to the issues — not least through other productions by companies like Woolly.

Chances are, most will be aware of the problem of the swaggering white male who thinks he “gets” being black, the liberal woman who feels she “identifies,” or even the cavalier attitude of Europeans who have never lived the complexity of the American experience of race. These audiences may admire the fine skill in how Drury reveals these “types,” but most will be well familiar with their failings. As the play travels deeper and deeper into the unfairness of white entitlement, it finally gets to the point where it feels a tad mean-spirited to be beating the metaphorical crap out of a white audience who cares enough to turn up, listen, and try to understand. In the end, Drury seems to be saying it doesn’t matter how “woke” you are, just by being white, you will be wrong. And if this really is the message, then what is the point in trying to listen to one another?

Still, director Stevie Walker-Webb and the ensemble do a phenomenal job in activating Drury’s vision. The standout in the sitcom family is Shannon Dorsey, walking a fine line on caricature with her Jasmine and delivering laser-like quips with pitch-perfect timing. As Beverly, Nikki Crawford offers an interesting charisma in her stilted character, while as husband Dayton, Samuel Ray Gates starts with some awkwardness, but soon finds his feet.

Perhaps the most challenging role here is that of daughter Keisha, who, after the sitcom and its iterations run their course, serves as a conduit into the final space in which Drury wants to explore scrutiny and race. Chinna Palmer plays the sitcom card reasonably well and segues with much sincerity into the play’s final monologue. But as powerful as the context may be and as emotionally focused as Palmer is, in those last moments when you can hear a pin drop, Drury never quite gives Keisha enough to say.

As the viewers and interlopers, Cody Nickell is painfully convincing as the harshly unapologetic Jimbo, while Kimberly Gilbert is equally credible in her plaintive, adamant and misguided Suze. Laura C. Harris brings just the right disdain to her foreign-born Bets, while Christopher Dinolfo’s Mack — if not quite recognizable in the intended caricature — works a fan like no other.

Fairview is a finely-crafted disruption and its issues are of vital importance. But it feels more like the end of a conversation than the beginning. 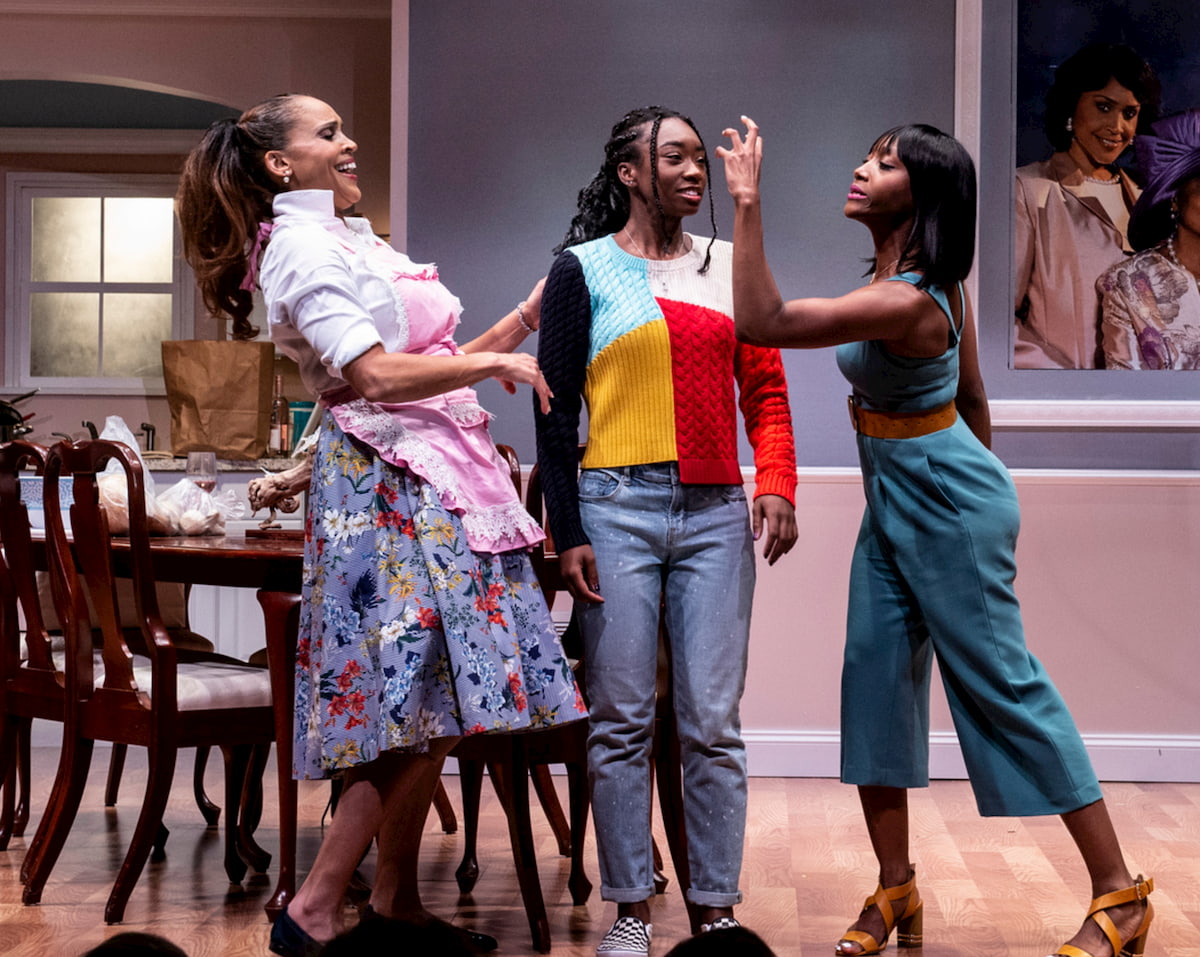