NFL quarterback Drew Brees says he’s not anti-LGBTQ, despite appearing in Focus on the Family-sponsored video

Brees defends decision to appear in ad for "Bring Your Bible to School Day," accusing media of misrepresenting his views

By John Riley on September 6, 2019 @JohnAndresRiley 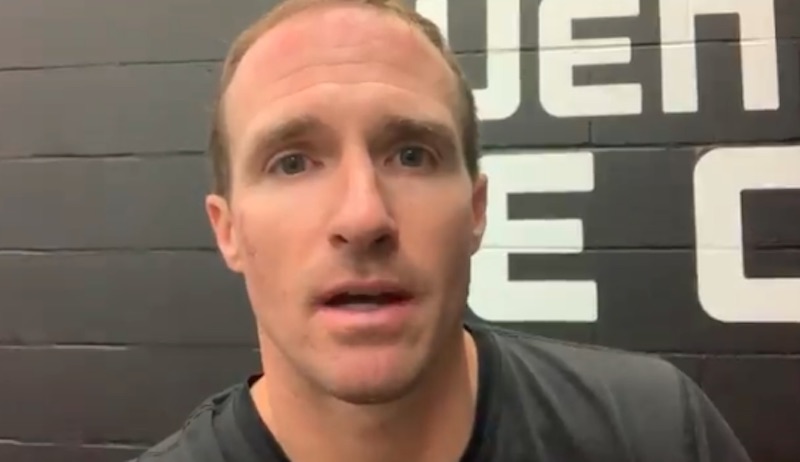 NFL quarterback Drew Brees is defending himself after appearing in a video publicizing an event organized by a major anti-LGBTQ organization.

Brees, a self-professed devout Christian, pushed back against accusations that he knowingly aligned himself with Focus on the Family when he shot a video announcement for “Bring Your Bible to School Day,” which encourages children to be proud of their faith and stand up for their beliefs by starting conversations with fellow students about their beliefs.

But the New Orleans Saints quarterback apparently did not expect the backlash he received after some in the media pointed to Focus on the Family’s past advocacy, including its apparent support for conversion therapy, which attempts to change the sexual orientation or gender identity of LGBTQ-identified individuals.

On Wednesday, Big Easy Magazine, a progressive publication in New Orleans, published a story titled “Drew Brees Records Video for Anti-LGBT Religious Organization,” in which the magazine detailed Focus on the Family’s various anti-LGBTQ stances and found evidence that Brees has interacted with the organization dating back to 2010.

On its website, Focus on the Family makes clear that its mission is to defend the institution of the nuclear family by encouraging people to embrace “biblical truths” that will strengthen their relationship with God and their families in the context of the Christian worldview.

Among those “biblical truths” are that marriage is an institution blessed by God between one man and one woman, that sexual activity is best reserved for marriage, and that gender is permanent, non-fluid, binary, and determined by one’s biological genitalia (as created by God) at birth.

While those views aren’t particularly groundbreaking or unusual when it comes to views embraced by most Christian religions, what sets Focus on the Family, along with a few other select organizations, apart from other Christian-oriented groups is its past advocacy of conversion therapy.

As The Washington Post reports, for years, Focus on the Family ran the “Love Won Out” ministry, which advocated that people struggling with “unwanted same-sex attractions” could “overcome” those desires by embracing God’s vision for human sexuality and marriage.

According to an archived capture of Love Won Out’s website, the group’s goal was to help people struggling with same-sex attraction and better aid parents who want to “learn how to better love their sons or daughters without compromising their faith.”

While Love Won Out did not specifically engage in conversion therapy efforts, it did provide people with links and contact information for groups that did, including the now-defunct Exodus International, Parents & Friends of Ex-Gays and Gays (PFOX), and JONAH, a Jewish group (which has since reconstituted as JIFGA, in violation of a court-approved settlement) that was sued and eventually found guilty by a jury of violating New Jersey’s consumer fraud law for promising a product (a change in orientation) which it could not deliver.

But Brees, apparently unaware of Focus on the Family’s past advocacy against LGBTQ rights and its support for conversion therapy practitioners, seemed caught off guard by the criticism he attracted from users on social media.

In a video posted to Twitter on Thursday, Brees explained that his intent was only to promote National Bring Your Bible to School Day and encourage youth to “be able to live out your faith with confidence.”

“There’s been a lot of negativity spread about me in the LGBTQ community recently based upon an article that someone wrote with a very negative headline, that I think led people to believe that somehow I was aligned with an organization that was anti-LGBTQ and so on and so forth,” Brees said.

“It means, love all, respect all and accept all. So, that is actually how I live my life. That is what I try to do with my family, with my teammates, with people in my community, with my friends, all people. No matter your race, your color, your religious preference, your sexual orientation, your political beliefs, it doesn’t matter.”

Brees added that he does not support any groups that discriminate, or that “have their own agendas that are trying to promote inequality.”

Hopefully this sets the record straight with who I am and what I stand for. Love, Respect, and Accept ALL. I encourage you not to believe the negativity you read that says differently. It’s simply not true. Have a great day. pic.twitter.com/4RdTahE7EZ

The video Brees appeared in was a 20-second promotional clip released last month. While Brees does not mention Focus on the Family in the video, the video directs viewers to a website published by the group promoting National Bring Your Bible to School Day.

When pressed by a reporter about his decision to shoot the commercial advertising the event, Brees said he was not aware of the event’s connection, through Focus on the Family, to anti-LGBTQ actions or messaging.

“It was not promoting any group, certainly not promoting any group that is associated with that type of behavior,” he said. “I know that there are, unfortunately, Christian organizations out there that are involved in that kind of thing, and to me that is totally against what being Christian is all about. Being Christian is love. It’s forgiveness, it’s respecting all, it’s accepting all.”

Focus on the Family President Jim Daly denounced the criticism being directed at Brees and praised the quarterback for helping promote the organization’s event.

“It’s unfortunate that mean-spirited antagonists have attempted to draw attention away from this event by mischaracterizing the beliefs and positions of our organization,” Daly told the Post in an email. “We must treat everyone with love and respect. In 21st century post-Christian America, the best and only way forward is to not poke ideological opponents in the eye but find ways to acknowledge and respect our differences.”

Making himself available to the media following the Saints’ practice, Brees continued to complain about Big Easy Magazine‘s coverage, saying: “My intent with that video was to make a positive impact in the lives of some young people. What’s a shame is that people make headlines just to get hits, just to get views, and all of a sudden these rumors spread that are completely untrue. Shame on them.”

In response to Brees’ comments, Big East Magazine tweeted: “The last thing we wanted to do was defame @drewbrees. The Publisher has always been a fan. It’s disappointing that you would spin this in a way to suggest our publication is publishing clickbait. I was your fan. The alliance you chose hurt a lot of people. Your apology would have been accepted if you hadn’t attacked us for clickbait. We were very very hurt by your actions.”

have been accepted if you hadn’t attacked us for clickbait. We were very very hurt by your actions.