With "Jojo Rabbit," Taika Waititi has created a satire for our times by visiting one of history's most harrowing moments 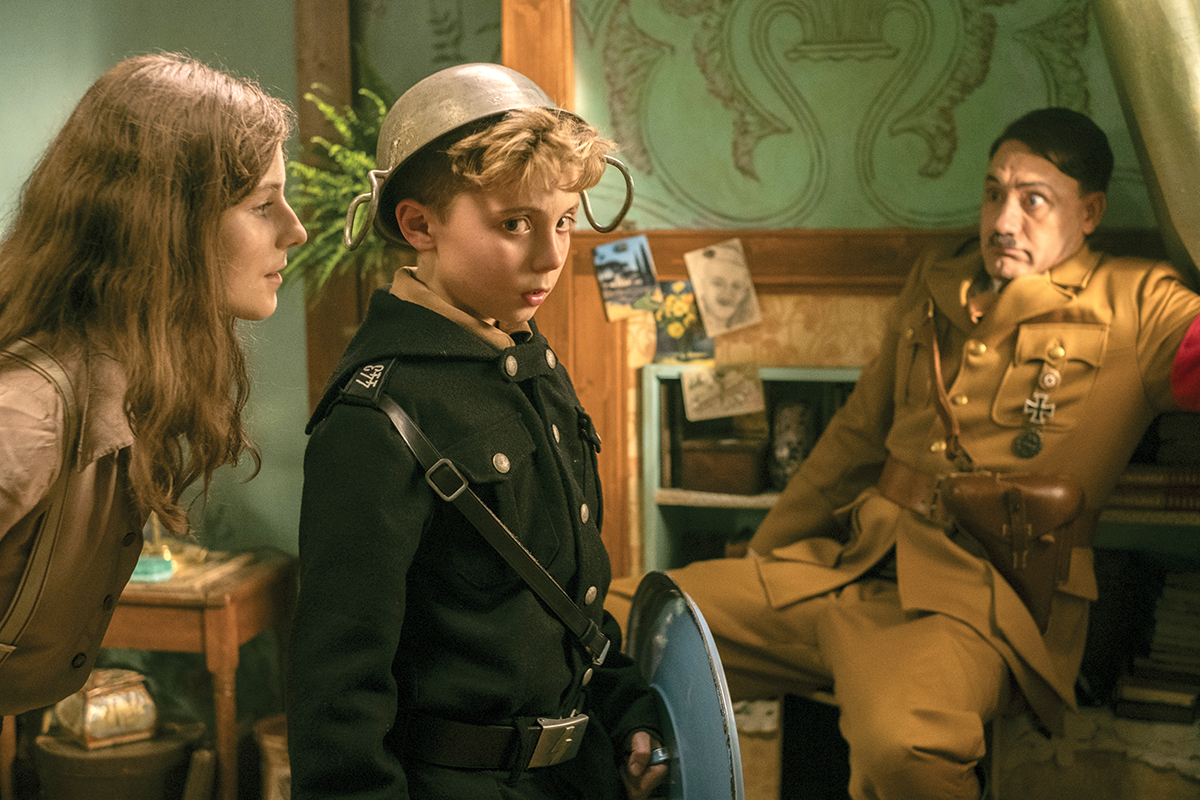 “It’s not a good time to be a Nazi right now,” sighs a gunpowder-smudged Yorki (Archie Yates) with a casual shrug. The end of World War II is drawing nigh and Yorki, at the tender age of 10, has been recruited into Hitler’s final wave of fighting forces. He’s talking to his best friend, Jojo Betzler (Roman Griffin Davis), also 10, and a former recruit who, due to an unfortunate mishap during training, was cut loose from battle duty. Instead, he’s been spending his wartime days helping the Hitler Youth offices spread false information. He’s like a living personification of a Facebook fake news feed.

Jojo is the centerpiece of Jojo Rabbit (★★★★★), the latest film by writer-director Taika Waititi. When Waititi is not putting his unique spin on Marvel movies (Thor: Ragnarok), he keeps himself busy concocting films that are wholly original, extremely funny, and deeply moving. For sheer comic impact, check out his magnificent vampire satire What We Do in the Shadows, created in tandem with frequent collaborator Jemaine Clement (it’s now a brilliantly funny FX series). But to truly witness the depth of Waititi’s abilities, seek out Hunt for the Wilderpeople, a bittersweet, poignant drama about a misanthrope who develops an extraordinary bond with a precocious, annoying child as they go on the run from New Zealand authorities. Jojo is a step up the evolutionary ladder from both films, combining the bald-faced satire of Shadows with the heartfelt emotions of Wilderpeople, all the while adding a massive dose of contemporary social commentary. It’s a sly film, one that catches you off guard, delightfully so.

By now, you’ve probably seen the trailers for Jojo Rabbit, with its prancing, off-kilter depiction of Adolph Hitler (Waititi), and either thought it looked amazing or amazingly dumb. Well, it’s the former. Still, trailers are deceptive little marketing tools, and while Jojo Rabbit is decidedly strange at points, it’s far more conventional than we’re lead to believe. As the film’s narrative takes hold, and key revelations come to light, Waititi’s greater point emerges with the clarity of a polished crystal. Jojo Rabbit isn’t an anti-Nazi film, it’s not an anti-war film, it’s a movie about why and how we hate, and how that hate blinds us to reality. Lies, told often enough, so easily become mantras resembling truth (hello, Mr. Trump?). But truth can win if the lies are decidedly proven unprovable. With our country going through its current trials, Jojo Rabbit arrives as if on cue. But, sadly, it’ll never convert the unconvertable because sophistication and real ideas elude them. So it serves as a reinforcement for the rest of us, encouragement to stay strong, stay on the path, fight like hell.

Waititi’s direction has its own special cadences. He’s got some trademark shots — a circular pan, for instance, so mind-blowing in Wilderpeople, is similarly deployed here to much more subtle effect. There are reveals within the storyline that wring your heart so strongly you fear it’ll burst. And Waititi proves himself a master of simple, effective framing, as he does with a seemingly simple shot of a pair of shoes.

Hitler, of course, is a metaphor — he’s the imaginary friend of Jojo, and he’s der Führer as only a 10-year-old could imagine him: petulant, whiney, manic, and a bit of a full-on looney tune. Jojo is slavishly devoted to the Aryan race, and Hitler is his muse. “He’s a fanatic,” his mother Rosie (a radiant Scarlett Johansson) says to Elsa (Thomasin McKenzie), the young Jewish girl she’s been sheltering in a hidden passageway in the house. “It took him three weeks to get over the fact that his grandfather was not blond.”

Everything shatters for Jojo when he discovers Elsa and, having never met a Jew, agrees to keep her concealed as long as she teaches him everything about the Jewish people. She happily obliges and reinforces the disinformation — Jews have horns, they sleep upside down, like bats, they mate with fish and can read each other’s minds but “not German ones, because German skulls are too thick,” and they cut off the ends of penises that Rabbis then use as earplugs. Eventually, Jojo begins to realize that maybe fake news is just that. And yet his mind can’t reconcile the truth and the lies. Perhaps his heart can do the work his mind can’t.

Waititi’s intent is to remind us that hate is a disease, one easily caught and spread. He’s also pointing the obvious way to an antidote: love. But true love is hard to come by and when it does, it’s often at too high a price. The film starts off funny and fresh, witty and wild, but it eventually turns inward on itself, bringing forth a tidal wave of emotions that are as unexpected as they are welcome.

Credit must go to the young, adorably snaggletoothed Davis, who is making his screen debut as Jojo. The performance is so perfect, so stunningly direct, it’s hard to believe he’s never acted on screen before. (Expect him to be nominated for an Oscar — and possibly win.) He’s supported by a cast that, in addition to a sparkling Johansson, features deft turns by Sam Rockwell, Alfie Allen, and, especially, Rebel Wilson, who steals her every scene as a machine gun-toting Nazi-mama. Stephen Merchant makes a suitably creepy Gestapo officer, while McKenzie supplies the movie’s soul as a young girl who must hide between the walls to stay alive. Her sadness, her loss, her isolation is painfully palpable. It drives the movie out of satire and into reality.

Just when you think cinema is getting routine, something like Jojo Rabbit hops along and perks it right back up, reminding us that, indeed, the medium is very often the message.

Jojo Rabbit is Rated PG-13 and opens at area theaters, including the Landmark E Street and Bethesda Cinemas, on Friday, Oct. 25.

Randy Shulman is Metro Weekly's Publisher and Editor-in-Chief. He can be reached at rshulman@metroweekly.com.
← Previous Story Poetic drama ‘Baghdad in My Shadow’ highlights queer characters among stories of Iraqi exiles in London
Next Story → Film Review: “By the Grace of God”