Lambda Legal: Idaho "might as well tear down the federal courthouse" if Brad Little signs bill into law 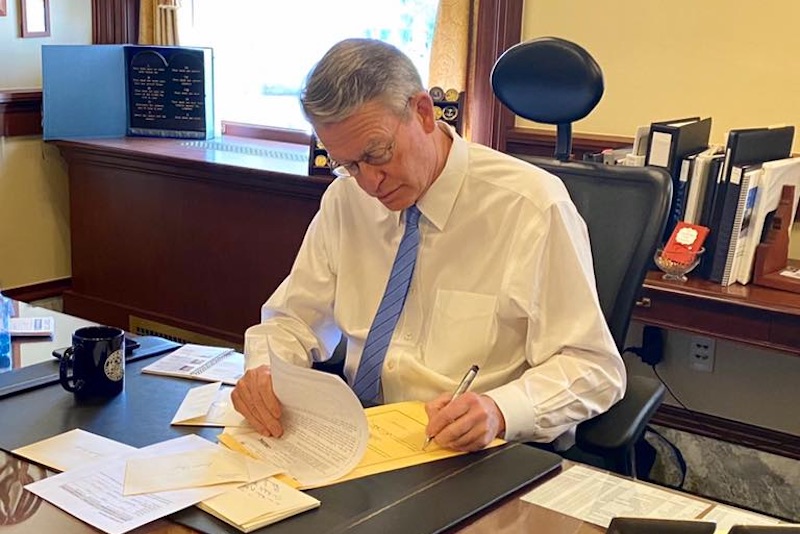 All eyes will be focused on Idaho Gov Brad Little in the coming days to see whether he signs a bill prohibiting transgender people from changing the gender on their birth certificate — a move that would flout an order from a federal court.

On Tuesday, the Idaho Senate passed a bill, previously approved by the House of Representatives, to bar any person born in Idaho from changing the gender marker on their birth certificates more than a year after the certificate is filed. After a year, it can only be changed by a court order “on the basis of fraud, duress, or material mistake of fact.”

The bill effectively restores what was the state’s policy up until two years ago, when, in response to a lawsuit from transgender residents, a federal court declared that barring a transgender person from amending their vital records to align with their gender identity was unconstitutional.

As part of her opinion in that case, U.S. Magistrate Judge Candy Dale issued an injunction blocking the state of Idaho from taking action to prevent transgender people from amending their birth certificates.

Related: Idaho tries to make it harder for transgender minors to change their birth certificates

The bill now heads to the desk of Gov. Brad Little (R) for his signature into law. LGBTQ advocates are urging Little to veto the bill, and have threatened to sue if he signs the measure.

“Idaho lawmakers might as well try to tear down the federal courthouse if they have this much contempt for the rule of law,” Lambda Legal Counsel Peter Renn, a lawyer who was part of the legal team that obtained the 2018 ruling, said in a statement. “They are explicitly defying a court order and exposing Idaho taxpayers to footing the bill for significant financial consequences — all while putting transgender people back in harm’s way for harassment and even violence, and once again making Idaho a national outlier.

“While the rest of the world is on fire responding to our global health crisis, Idaho lawmakers are fixated on transgender people’s birth certificates and coming up with solutions in search of problems,” Renn added.

As part of the original lawsuit in 2017, Lambda Legal successfully argued that denying transgender Idahoans the ability to correct their birth certificates to reflect their true identity is not only discriminatory, but violates their right to privacy, liberty, and freedom from compelled speech under the U.S. Constitution.

Lawyers for the plaintiffs also successfully argued that prohibiting people from having birth certificates that match their perceived gender unnecessarily “outs” them to strangers and potentially places them at risk of violence.

To demonstrate this, they provided evidence that one of their clients was ridiculed and harassed when she showed her birth certificate at the local Social Security office, with one employee calling her a “tranny,” and someone who overheard the comment calling her a “faggot.”

According to the 2015 U.S. Transgender Survey, almost one-third of transgender individuals who showed an identity document that was incongruent with their gender expression reported being harassed, denied benefits or services, discriminated against, or physically assaulted.

“Essential identity documents should accurately reflect who you are, and the federal court in Idaho already recognized that the government cannot rob transgender people of this basic tool to navigate through life,” Lambda Legal Staff Attorney Kara Ingelhart said. “It defies belief that Idaho legislators resurrected this archaic and frankly dangerous policy already declared unconstitutional, and we urge Governor Little to respect the role of the courts in maintaining the rule of law.”