The Shakespeare mounts an evening of giggles and frolics that serves as a reminder that a clever wit is always timeless. 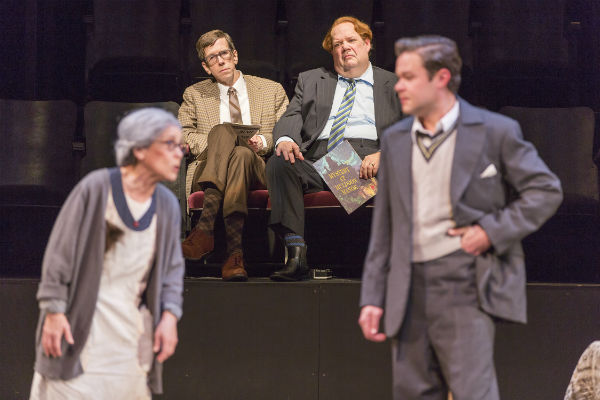 ), plays that satirize not only the conventions of theater, but those who critique it. How does one get stuck in without sounding exactly like one of the characters being so cleverly parodied?

Still, needs must when the devil drives.

Delivered as two one-act plays, Critic and Hound are like an interesting, improbable couple — each one very different but both very fun to be with. Sheridan’s is the extrovert, a rambunctious, talky 18th century farce, while Stoppard’s works at the lower, more cynical temperatures of a mid-20th century class-conscious England.

The evening starts with the antique antics of The Critic, which, despite the luxuriously clever wit (and the cheeky bounce delivered by Jeffrey Hatcher’s adaptation), is the decidedly sillier of the two. When theater critics Mr. Dangle and Mr. Sneer discover that Mr. Puff, a journalistic gadfly making a living off shamelessly sponsored content, has written a play, they offer to critique a rehearsal. As Puff tries to put his somewhat recalcitrant actors through the paces of his stultifyingly stiff tragic-comedy, Sneer continuously interrupts with sabotaging advice. He soon has Puff dancing through hoops until a finale in which there is no telling who will get the last word: Sneer, Puff, the actors or Scenic Designer James Noone’s charmingly inventive sets.

If there is something of the puppet theater about this play-within-a-play, with its bright and simple sets and Murell Horton’s intricately-colored costumes, director Michael Kahn deliciously subverts it with a sense of joyous unpredictability. If it is a puppet theatre, it is an unruly one, and that’s how we like it. Of course, The Critic is not the easiest play to keep alight, since once it settles into the call-and-answer routine of the play rehearsal, the farce largely overtakes the wit, but Kahn stokes it in all the right places.

What really makes The Critic spin is Robert Stanton’s Puff. Graceful, gangly, and broiling with agitated affectation, this is a foppish Puff to savor. Not only does Stanton have the smoothest, most impeccable comic timing, he can deliver it little or large. One minute he might explode in a ridiculous flourish of a bow and the next he will be just as funny with the merest furrow of a brow. It is his facility with Sheridan’s language that brings such joy; the words swoop and dive like flocks of boundless happy birds. Add a seriously intuitive feel for the cadence and rhythms of a British accent and it’s the whole package.

Although Stanton decidedly steals the show, other standouts are Robert Dorfman, who gives his Sneer a pleasing kind of abruptness, the kind of rapid fire reminiscent of an old forties movie. It complements the mood well, if occasionally getting lost in the fray. Naomi Jacobson is memorably scathing as the long-suffering Mrs. Dangle.

One intermission later and the mood is completely different, as is the angle, with Stoppard’s take on the play-within-a play theme including a view of not just a gloomily-lit stage but a few choice theater seats behind it. Stoppard’s play is as much about the critics reviewing it as the play itself.

As two seasoned second-stringers settle in to half-heartedly await the play’s start, it quickly becomes clear that they are preoccupied with far more than the arts. As the play begins, a campy take on an Agatha Christie-style whodunit, it seems like business as usual until emotions run high and all manner of lines and realities are crossed. There will be no spoilers here, but suffice it to say, Stoppard is as devious as he is funny — though it’s a darker, more contemporary vein than Sheridan’s.

Displaying extraordinary versatility, Robert Stanton returns as the amusingly repressed critic, Moon. Sporting heavy-rimmed National Health Service glasses and hunched in inoffensive blazer, the transformation is so complete Stanton looks as if he’s lost a foot in height. Moon is of England’s middling classes — just educated and worldly enough to know what he’s missing and Stanton gives his man the perfect undercurrent of quietly disgruntled energy. As events unfold, it is Moon’s bafflement that carries the humor and the tenor of Stoppard’s grand design.

The whodunit, meanwhile, giggle-worthy in its absurdly mannered style, plays foil to the critics, and thanks to the ensemble who carry it off, truly delivers. Naomi Jacobson gives her housekeeper, Mrs. Drudge, the ideal deadpan and her comic timing is pitch-perfect. As Major Magnus, Hugh Nees is suitably gung-ho and he nails the accent with flair. As the young Felicity Cunningham carrying off her tennis whites and evening dress like she was born to it, Sandra Struthers keeps it feisty but nicely honed. Playing counterpoint as the mature and brittle Cynthia Muldoon, Charity Jones is slinky, cool and compelling, while John Catron is an appropriately arch Simon Gascoyne.

As the slightly crazed Inspector Hound, Robert Dorfman is almost in his element but is thwarted by an accent that flips between semi-Northern and semi-posh. Either would have worked, but not both. John Ahlin has similar difficulties and it dampens the repartee of his critic Birdboot with Moon. Interestingly, because accent (whether or not it should) delivers so much social and cultural data, Ahlin’s amorphous efforts also make his man a tad harder to grasp.

But it’s a minor quibble in a precision piece that director Kahn delivers with seamless dexterity and nothing short of élan. Indeed, between Critic and Hound, this is an evening of giggles and frolics. It’s a delicious reminder that a clever wit is timeless.

Check now: Discount tickets to The Critic and The Real Inspector Hound

The Critic and The Real Inspector Hound

← Previous Story Gender Neutralized: “As You Like It” at Center Stage
Next Story → Ungentlemanly: “A Gentleman’s Guide” at the Kennedy Center (review)