Taylor Mac's Hir is an important treatment of gender identity, but it sometimes lacks nuance

There are a couple of ways to take Taylor Mac’s Hir (★★★). On its face, it’s a tragicomic look at gender identity and roles, both traditional and enlightened, in a beleaguered family — one in which everyone is struggling for acceptance and validation. But from another, arguably more interesting vantage, it is the anatomy of the American family in crisis.

A crisis born of the kinds of socio-economic pressures that thwart every attempt to grab and hang onto those oft-touted tickets to financial security and a “better life”: education, employment, and enlistment. They may aspire, but they are doomed from the start. By the finances that put them into poor neighborhoods with bad schools. By the outmoded traditions that dampened the family’s earning power. By the dysfunction that has remained untreated. Put simply, they are a prime example of the fodder in a system designed to ensure an underclass.

Just look closely. As eldest son Isaac arrives home from his stint in the armed forces, it is abundantly clear that he has joined a newly acknowledged cohort: the innumerable young returning from service with potentially lifelong psychological damage. There was no psychological support for Isaac while he was on duty in the highly disturbing Mortuary Affairs unit, and there will be none now he is home. Instead of a ticket out of his dysfunctional life, Isaac is now even more disadvantaged, his chances of gainful, stable employment even less likely.

Wife and mother Paige, who has endured a marriage of abuse and subsistence-living, has been eagerly re-inventing herself since her husband’s incapacitation, but she too, has been sold a bill of goods. Education and employment may be touted as ways out of poverty’s trap and as the keys to self-actualization, but without practical guidance, they fizzle like firecrackers bought in a Walmart parking lot. As for husband and father Arnold, his own attempts to capture the American dream — albeit via an outmoded model — have also failed. He cannot afford proper healthcare when he needs it, he has built almost no financial security for his family, and he is roundly loathed.

Indeed, the youngest, the gender-transitioning teen Max, is perhaps the only one offering hope. Max has been bullied in the local school, but has found companionship among other outsiders on the Internet. Leaving behind education and a conventional job may leave Max as financially vulnerable as the rest of hir (Max’s pronoun of choice) family, but at least ze (another pronoun choice) will have escaped the false promise of conventional society.

In this treatment, Mac captures something extremely subtle: for the under-privileged and undereducated, life is a prison that breeds dysfunction. Why didn’t Paige leave her abusive husband? Why didn’t she defy him and get, if not an education, then at least a job? Why did Isaac feel his only avenue was enlistment? Why did he throw it all away? Why didn’t Arnold do better for his family? Why didn’t he wise up to his Neanderthal ways? What Mac shows is that it’s not just about chronic lack of means and opportunity, it the psychology that comes to cloak it. As the family descends into chaos, the devolution into old and new angers, frustrations and despairs is increasingly frantic. They are trapped and imploding and Mac describes it with unsettling precision.

There are a few heavier-handed moments. In Mac’s bid to keep the comedy alive, there are some overdone showdowns: The choice to use a dress-up play as a vehicle to describe Paige’s deeper trials is too contrived to be taken as anything other than an interlude of surreal flight. Director Shana Cooper nevertheless does an excellent job of managing the bigger picture, and keeping not just the momentum but the cohesion intact.

“Emily Townley is simply stellar, capturing this woman as she dances between denial, rage, hope and despair.”

As for the actors, the challenge here is to create a viable sense of family, but to also convincingly describe its chaos and downfall. Central to the process is wife and mother Paige with foot hard on the gas, but eyes determinedly not on the road. Feverishly driven, Emily Townley is simply stellar in the role, capturing this woman as she dances between denial, rage, hope and despair. It is not easy to paint such a complex portrait with such clarity — and without resorting to cliché — and Townley nails it. Her chemistry with stroke-victim husband Arnold is consistently interesting, even if there is something more cartoonish than real in his relegation. As Arnold, Mitch Hebert is memorable, delivering a convincing man who has grown used to his limitations and his lot. If Mac is a tad inconsistent regarding his incapacitation, Hebert works it with finesse and credibility.

In another difficult role is Joseph J. Parks as Isaac. Mac does not give us much of what makes this man tick and an awful lot of what he does is reactive. Parks fills the gaps without resorting to the stereotypical portrayal of a veteran, but a bit less might have been more. Isaac grew up with these people — is he really going to react to every little thing they say and do? In real families, people are often surprisingly inured. As for Max, Mac does a good job of making hir feel less like a teachable moment on gender-fluidity and more like a real person, and Malic White embodies hir with much appealing charisma.

There is no doubt that this play will be important to anyone who wants to see issues of gender identity treated on stage. But the message here is nuanced: Whatever one’s gender-identity and whatever one’s hopes for the world, it’s all got to somehow co-exist with a lot of real — and extremely messy — day-to-day living.

Check for discount tickets to see Hir at Woolly Mammoth. 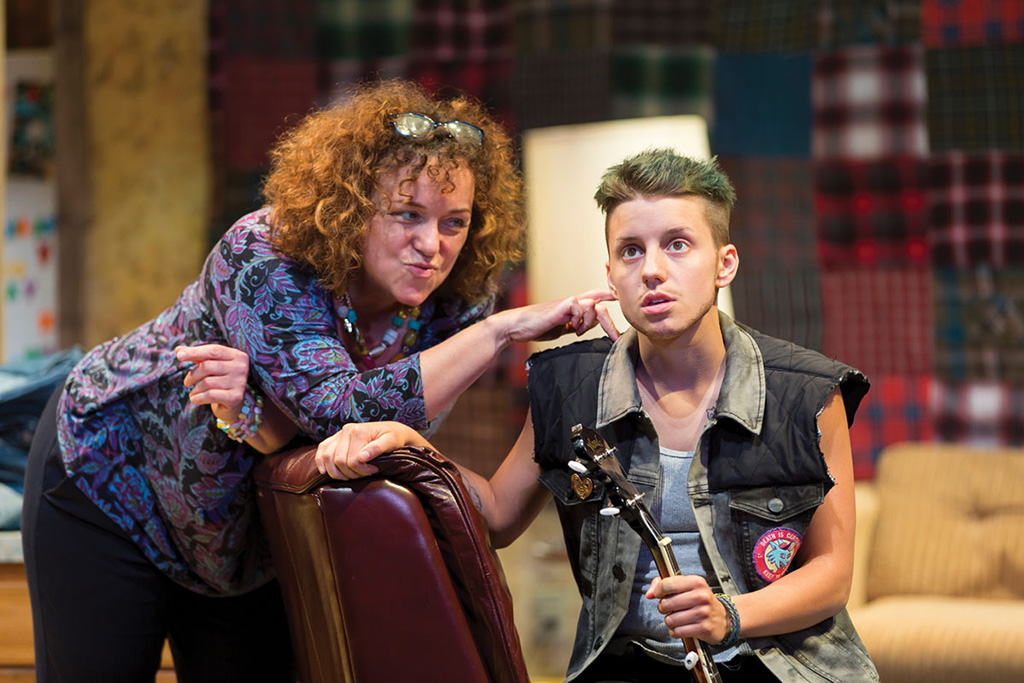 ← Previous Story Noises Off at Everyman Theatre
Next Story → Antoinette Robinson on Trump, DC theater and taking on Timon