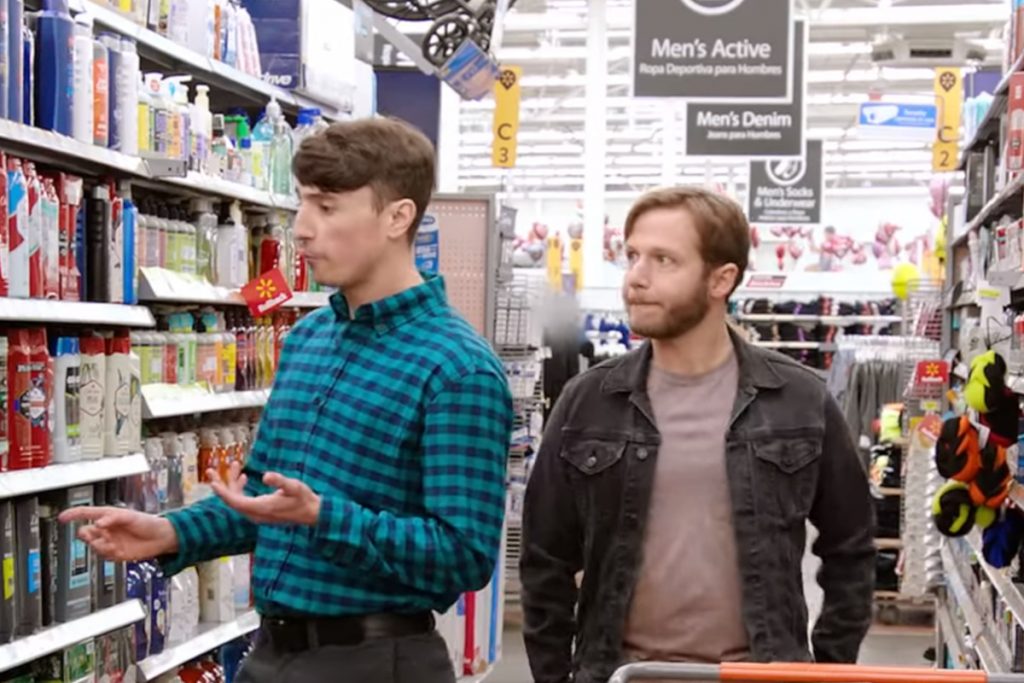 One episode of “Love Is In The Aisle” features same-sex pairing Pat and Andy. The fairly innocuous video shows the men discussing their habits, shopping for hair and cooking products, and Andy giving Pat a Creme Pie.

Unfortunately, two men sharing a Little Debbie snack was apparently enough to rile AFA, which sent a livid message to its followers demanding they rise up against Walmart and its “cultural revolution.”

“In a move that most Christians probably never expected to see, retail giant Walmart has posted an online video that normalizes homosexual relationships,” the organization wrote in a press release, adding, “for most Christians and other traditionalists, the idea that marriage is between a man and a woman is sacred.”

Watch the full video below:

AFA sent an “Action Alert” to its followers urging them to sign a petition demanding Walmart remove the video and “remain neutral on controversial issues.” (It should be noted that homosexuality is not illegal, and same-sex marriage has been legal nationwide since 2015.)

“We’ve seen many large corporations reject that in their marketing, but I honestly never thought Walmart would join the cultural revolution and reject the beliefs of its customer base,” said AFA President Tim Wildmon. “It’s clear that Walmart is on the path of elevating homosexual relationships to the same level as the male-female model of marriage.”

Wildmon continued: “We have no choice but to ask our supporters to let the company know how customers feel about Walmart’s shift away from neutrality on this controversial issue to full support for same sex relationships.”

AFA is no stranger to anti-LGBTQ campaigns, having previously spearheaded campaigns against Walgreens and Target over their transgender-inclusive restroom policies.

Last year, AFA’s One Million Moms activist group claimed that Walgreens allowing transgender people to use the restroom that corresponds with their gender identity could “potentially result in female customers becoming victims of voyeurism, sexual assault and physical attack.”

A similar rhetoric was used in an attack on Target’s pro-transgender restroom policy, with AFA shamelessly piggybacking on the 2016 Pulse shooting in Orlando — which saw dozens of LGBTQ people and allies killed — to slam Target for “[allowing] men to frequent female restrooms and changing facilities.”

They continued: “We view this policy as a danger to women and children because it provides a possible gateway for sexual predators to gain access to their victims.”

It should be noted that there are currently zero reported incidents of a transgender person harassing women or children in restrooms — but multiple counts of transgender people being harassed or discriminated against for simply trying to use a toilet.

And that’s not all. AFA also slammed a 2016 National Geographic cover featuring a transgender child, saying in a petition that they were “offended by [the magazine’s] choice to place a young child that is struggling with gender dysphoria on the cover.”

“Susan Goldberg, the National Geographic editor, should be ashamed of herself for using a young child in such an abusive manner,” AFA said on their website.

And in 2015, AFA’s Bryan Fischer blamed horrendous flooding in Texas on “sodomites,” agreeing with a caller who opined that “sodomite mayor” Annise Parker (Houston’s openly lesbian mayor) was the cause of the floods.

AFA also tried to scare its followers in 2014 by asserting that “homosexual activists” were “intentionally seeking out Christian business owners for the sole purpose of attacking and destroying religious liberties.”