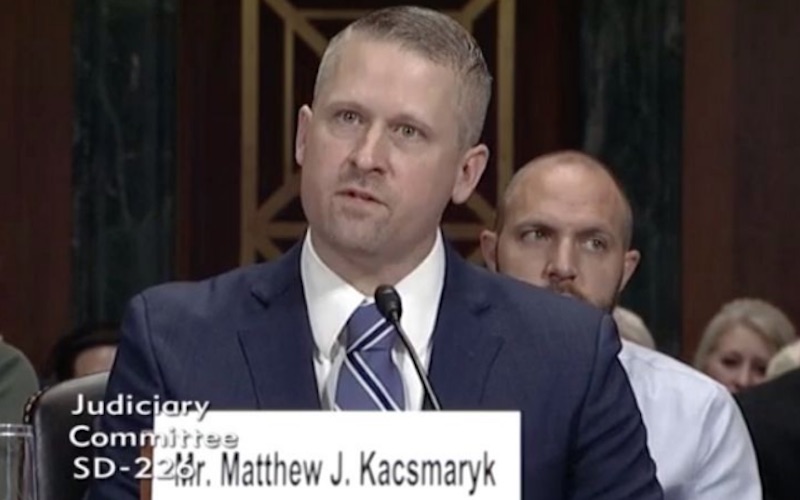 Repeating a pattern of behavior that has occurred over and over again during Donald Trump’s presidency, the U.S. Senate narrowly voted to confirm a judicial nominee to a lifetime appointment, despite concerns over his anti-LGBTQ record.

On Thursday, the Senate voted 52-46 to confirm Matthew Kacsmaryk to the U.S. District Court for the Northern District of Texas, with Sen. Susan Collins (R-Maine) being the only Republican to vote against his nomination.

Kacsmaryk has long been an opponent of LGBTQ rights, calling for a “long war” dedicated to opposing legal protections for LGBTQ people in employment, housing, and health care, arguing that such protections are incompatible with the religious beliefs of most Americans. As deputy general counsel to the anti-LGBTQ Liberty Institute, he signed onto a letter calling the inclusion of protections for victims of intimate partner violence in the Violence Against Women Act a “grave mistake.”

In 2015, when Utah passed its nondiscrimination law, he called the law a “bad idea” because it suggested that anti-LGBTQ discrimination should be taken as seriously as other types of discrimination. Yet even the Church of Jesus Christ of Latter-day Saints backed the legislation — due, in part to a broad religious exemption carve-out — showing how extreme Kacsmaryk’s outright opposition, even with the inclusion of exemptions, was.

In 2016, he signed onto a letter submitted as part of the public comment period for a proposed regulation regarding nondiscrimination in health care, in which he and his fellow signatories called being transgender “a delusion.” And he has consistently voiced support for allowing employers to use their own religious beliefs as justification for refusing to provide insurance for birth control or other medications — a principle, that, as Metro Weekly has previously reported, has grave implications for the LGBTQ community.

Alarmed by Kacsmaryk’s hostility towards LGBTQ equality — as demonstrated by his past comments — more than 300 parents and caregivers of transgender youth signed a letter last December expressing their opposition to his nomination.

“Confirming Mr. Kacsmaryk as a federal judge would send a damaging and dangerous message that the dignity of children like ours does not count in the courts, or in the U.S. Senate,” the letter reads.

Additionally, 75 LGBTQ and allies groups sent a letter to the Senate earlier this month urging them to reject his nomination — marking him as the most opposed judicial nominee ever by LGBTQ organizations, surpassing even the number of groups that expressed opposition to Supreme Court Justice Brett Kavanaugh.

Prior to the vote this week, advocates held a conference call with Sen. Richard Blumenthal (D-Conn.), Sen. Jeff Merkley (D-Ore.), Rep. Joseph Kennedy III (D-Mass.), and Rep. Don McEachin (D-Va.), warning of the implications Kacsmaryk’s confirmation could have for the LGBTQ community. But despite pleas from their equality-minded colleagues, as has occurred many times before, most Republican senators have voted to confirm nominees with a history of anti-LGBTQ animus.

Mara Keisling, the executive director of the National Center for Transgender Equality, blasted the Senate for confirming Kacsmaryk as part of a long-term strategy to stack the courts with judges with anti-LGBTQ views.

“Transgender youth and their families are facing a crisis in this country, and they cannot afford an unqualified and clearly biased nominee like Matthew Kacsmaryk. Our country needs fair-minded judges free of irrational prejudices against marginalized people,” Keisling said. “The anti-transgender takeover of the federal bench led by President Trump and Leader McConnell puts transgender people at risk of being erased by ideological judges handpicked for that very purpose.”

Sarah Warbelow, the legal director of the Human Rights Campaign, called Kacsmaryk “among the most anti-LGBTQ judicial nominees put forward by the Trump-Pence administration.”

Kacsmaryk, Warbelow said, “has a long history of virulently anti-LGBTQ opinions and positions — including his deeply disturbing opposition to same-sex marriage, his vocal hostility towards legal protections for gender identity and sexual orientation, and his shocking refusal to recognize the basic humanity of transgender people.

“Kacsmaryk fails the basic expectation of impartiality and commitment to equality under the law that we demand of every member of the bench,” she added. “The Human Rights Campaign will continue to raise the alarm about Kacsmaryk and future nominees who refuse to protect the rights of all Americans.”

John Riley is the local news reporter for Metro Weekly. He can be reached at jriley@metroweekly.com
← Previous Story Roy Moore, homophobe and accused child molester, is once again running for Senate
Next Story → House Ways and Means Committee approves bill to remedy LGBTQ discrimination in federal tax code