What a horrifying thought for any modern Black woman to wake up as a slave in the Antebellum South, picking cotton in the devilish heat of the Louisiana sun, being whipped and branded, and brutally reminded of her lack of status in society. Antebellum (★★☆☆☆), the lushly photographed debut feature by filmmaking team Gerard Bush and Christopher Renz spends its opening act driving home the torturous treatment inflicted on the Black women and men working a cotton plantation under cruel overseer Captain Jasper (Jack Huston). One fieldworker is punished with particular viciousness until she submits to the name her enslaver, known only as Him (Eric Lange), has given her. And so we meet Eden, played with bright-eyed but quiet fire by queer pop music phenom-turned-actress Janelle Monáe.

A warmly stoic supporting heroine in the award-winning biopic Hidden Figures, and a model of cunning and resourcefulness as a fictional abolitionist in Harriet, Monáe is powerfully convincing as Eden, a potential leader of her people. Eden searches within herself for the strength to endure and maybe even escape, and all signs point to it being only a matter of time before she makes a move.

But the film makes the first move, shifting the story, and lead character’s reality, to the modern world, introducing Monáe as celebrated author, speaker, mom, wife, and woman having and doing it all Veronica Henley. Oddly, Monáe and the movie are more persuasive enacting the indignities of slavery than depicting the lightly comic, Real Housewives adventures of Veronica and her BFFs Dawn (Gabourey Sidibe) and Sarah (Lily Cowles). Sidibe gets off several chuckle-worthy quips and putdowns, although Dawn and Sarah serve no apparent purpose other than to help lull the audience into a false sense of ease, before some dastardly twist spins Veronica back, forward, or sideways into the terrible reality of enslavement.

That twist clearly will have something to do with Jena Malone’s snidely smirking Elizabeth, a mystery woman who announces herself as Eeee-vil every time she appears on screen. It is a performance so lacking in subtlety that Monáe’s Veronica appears seriously lacking in situational awareness to allow this ill-intentioned soul anywhere near her. Several other glaring red flags of danger ahead also fall flat, from the archetypal creepy moppet lingering silently at the end of a long hallway, to a “scary” bouquet of cotton balls delivered to Veronica’s hotel room.

For the most part, the fake-outs and red herrings produce striking images, but don’t stand up to scrutiny if given a first thought, let alone a second. And least frightening of all is the film’s big twist, which certain M. Night Shyamalan fans might spot galloping over the horizon long before Antebellum rounds the turn to its strained, vengeance-laced conclusion.

Antebellum is available on Friday, Sept. 18 for VOD on all major platforms. 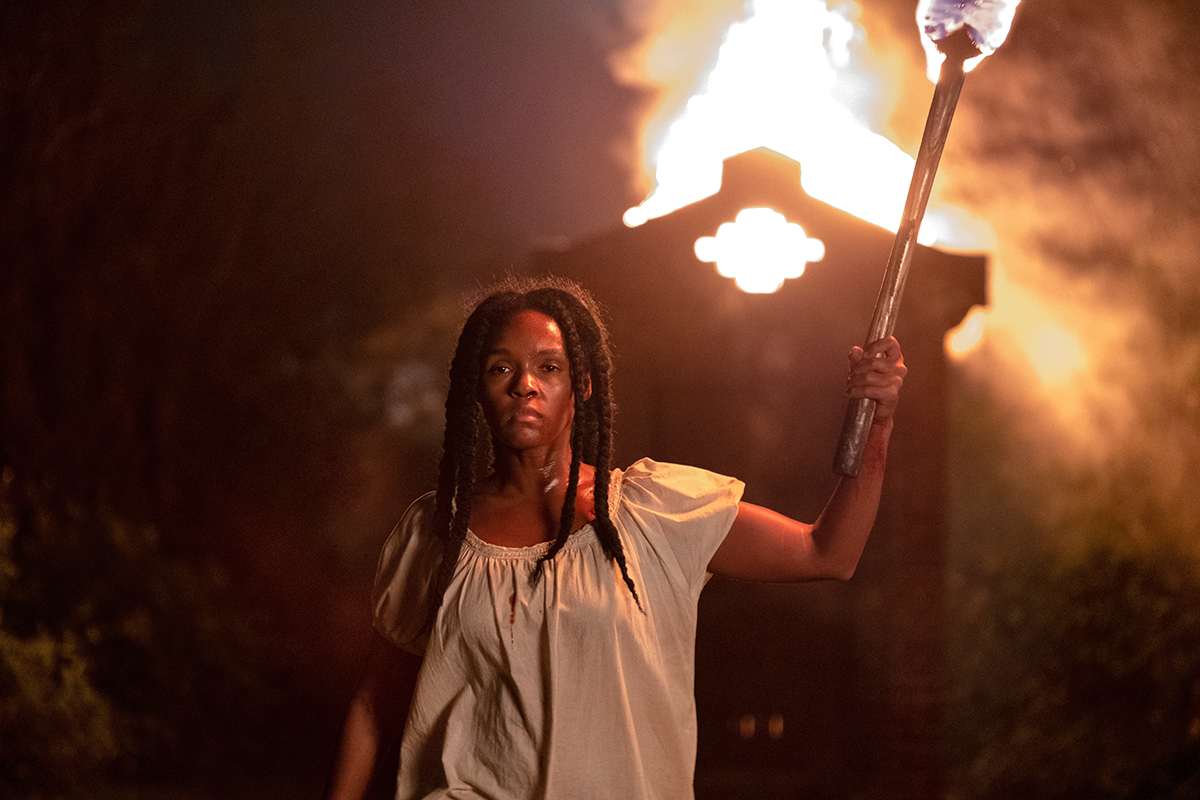