By John Riley on November 29, 2016 @JohnAndresRiley 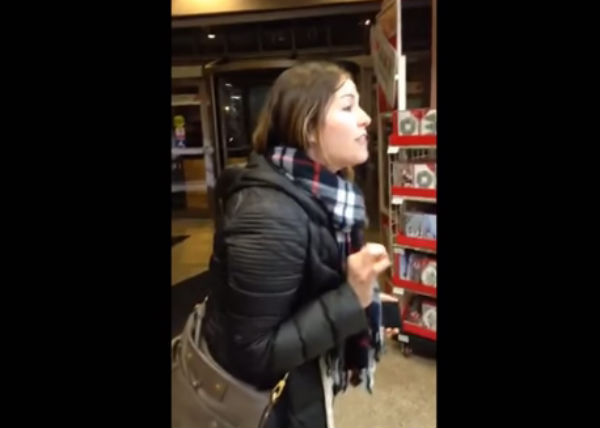 The Chicago woman who went on a pro-Trump tirade at a Michaels store, during which she referred to two store employees as “animals,” has previously engaged in similar behavior against the manager of a local coffee shop manager, calling him a “bitch” and implying that the man may be gay.

The woman in question was filmed by a fellow customer at Michaels on Wednesday evening. The video shows her shouting at a store employee, and then a manager, claiming she’s been “discriminated against” because of her race or her political preference.

She claims the employee yelled at her across the store like an “animal,” and proceeds to rant against other customers who were filming her and onlookers. According to the customers, the rant went on for nearly 45 minutes, but only 10 minutes were captured on film.

Once the video was posted, it went viral, getting more than 2.2 million hits on YouTube. (Watch the video below.)

But this was not the woman’s first time engaging in an embarrassing public rant against a service worker. A reader sent Chicagoist a 1-minute, 48-second video of what appears to be the same woman disparaging a manager at a Peet’s Coffee shop in July.

“You’re the bitch! You are the bitch! You are literally the bitch!” the woman is seen shouting at the Peet’s Coffee employees as she makes her way angrily to the counter. The woman mimics the manager’s voice in an effeminate way and insists that one of his employees called her a bitch. She then claims she thought she was in mortal danger from the barista.

When the manager tried to defend his employee, the woman threatened to call the store’s corporate headquarters.

“You think because you’re in Boystown, you’re safe?” she says, referencing a predominantly gay neighborhood in Chicago. “Corporate’s not in Boystown.”

At one point she appears to call the manager, Bobby, “Bambi,” and says: “I can stereotype you, and call you something,” which appears to be a veiled reference to the word “faggot.”

The woman from the videos has since been identified as Jennifer Boyle, a graduate of DePaul University that until recently was working for Sinai Health System in Chicago as a human resources business partner. Once she was identified, people began commenting about Boyle’s behavior on Sinai’s Facebook page and posting negative reviews, prompting Sinai to issue a statement.

“Last Wednesday, a customer started yelling at employees and making racial comments in a retail store in the Chicagoland area, and a video of that altercation went viral,” the statement reads. “We have learned that this customer was a former employee of Sinai, whose employment with us ceased in September. Sinai Health System embraces diversity, inclusion and respect for all people. We condemn and reject any behavior or statements that insult or demean anyone based on race, gender, religion, sexual orientation or nationality.”

Boyle has since removed her Facebook page and her LinkedIn page, which were used to help identify her. Meanwhile, the hashtag #JenniferBoyle is trending on Twitter, and people have even tried to find other users who they believe are connected to her.

See the video of her Peet’s Coffee rant below:

See the video of her Michaels rant here:

Woman Seen Going Off On Employees At Peet’s Coffee.

REPEAT OFFENDER! New Video Surfaces Of Woman Who Went Off At Michaels Store Going Off On Peet’s Coffee Employees

John Riley is the local news reporter for Metro Weekly. He can be reached at jriley@metroweekly.com
← Previous Story Jerry Falwell, Jr. claims Trump offered him Education Secretary post
Next Story → Trump picks Nikki Haley to be next UN ambassador