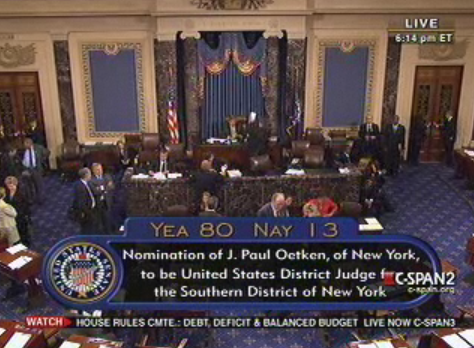 Today, in a 80-13 vote completed at a little past 6:10 p.m., the Senate approved the nomination of out gay attorney J. Paul Oetken to serve as a federal disctrict court judge in the Southern District of New York. The move came with no opposition from Senate Democrats and a majority of the Republicans supporting the nomination as well.

On the federal trial court bench in Manhattan, he will join Judge Deborah Batts, an out lesbian nominated by President Clinton in 1994, and is the first out gay man approved by the Senate for an Article III federal judgeship. Article III judges — referencing the judicial powers detailed in the Constitution — have lifetime tenure. 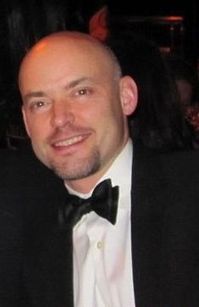 Oetken, nominated in January for the position by President Barack Obama, served in the Clinton administration as both an associate counsel to the White House and, earlier, in the Department of Justice as an attorney-advisor in the Office of Legal Counsel. At the time of his nomination, he was senior vice president and associate general counsel of Cablevision Systems Corporation. He previously was a lawyer at the New York offices of Debevoise & Plimptom LLP.

His nomination was referred to the full Senate on April 7 after a March 16 hearing.

Sen. Charles Schumer (D-N.Y.), who has been supporting the nomination, praised Oetken’s background and experience on the Senate floor shortly before the vote, saying “His confirmation will only improve the workings of one of the best and one of the busiest courts in the country.”

Of Oetken’s place as the first, Schumer said, “At this moment, Paul is not just an excellent candidate, as the first openly gay man to be confirmed as a federal judge and to serve on the federal bench, he will be a symbol of how much we have achieved as a country in just the last few decades.”

Before the vote began, Sen. Chuck Grassley (R-Iowa) — the ranking Republican on the Judiciary Committee — also announced that he would be voting for Oetken, who was born in Iowa.

Human Rights Campaign president Joe Solmonese said in a statement, “We commend the Senate for their historic vote today. Confirmation of Paul Oetken serves as a role model for all LGBT people interested in serving on the judiciary and shows LGBT youth that hard work pays off.

He continued, “The federal bench is greatly lacking LGBT diversity and with thousands of qualified LGBT attorneys in the U.S., there is no reason why the federal bench should not better reflect the composition of our country.”

The Victory Fund — which helps out LGBT candidates win elective office but also leads the Presidential Appointments Project to encourage out LGBT people to seek executive branch nominations, appointments and other jobs — praised the development

Victory Fund vice president for communications Denis Dison told Metro Weekly, “Our community is still recording its ‘firsts,’ and this is an important one. The federal judiciary has long been virtually void of openly LGBT judges. We’ve crossed another threshold this evening.”

Among Oetken’s other work, he represented the National Lesbian and Gay Law Association in submitting its amicus curiae, or friend of the court, brief in Lawrence v. Texas in 2003. In the case, which resulted in striking down all sodomy laws in the nation, Oetken co-authored the brief with Chai Feldblum, who serves as a commissioner of the U.S. Equal Employment Opportunity Commission.

As Metro Weekly reported on July 15, another of Obama’s out LGBT nominees, Alison Nathan, saw her nomination reported favorably on July 14 by the Senate Judiciary Committee to the full Senate for a vote. Nathan, nominated in March to serve as a district court judge in the Southern District of New York, previously served as a White House associate counsel.

A third out nominee, Edward DuMont, has not seen his nomination proceed in a similar fashion to the nominations of Oetken or Nathan. Originally nominated by Obama in April 2010 to be an appellate judge in the U.S. Court of Appeals for the Federal Circuit, his nomination languished in the 111th Congress — despite an American Bar Association rating of “unanimously well qualified.” At the end of the session, his nomination was returned to the president, who renominated DuMont on Jan. 5 in the 112th Congress. Although the Judiciary Committee has not even scheduled a hearing for DuMont, a committee spokesperson on July 14 had no further information about the nomination.

[UPDATE: A spokeswoman for Hagan tells Metro Weekly that Kagan supported Oetken’s nomination but was delayed from returning to Washington due to flight problems.

Of the nomination, Hagan said in a statement, “I applaud the overwhelming bipartisan support for the nomination of Paul Oetken to the U.S. District Court for the Southern District of New York” — calling it a “great day for the LGBT community and the nation.”

Hagan press secretary Sadie Weiner told Metro Weekly, “On Monday, Senator Hagan was in Charlotte to speak to a camp for high-school aged young women interested in pursuing studies and careers in high technology industries. Her scheduled flight from Charlotte back to Washington was delayed several times causing her to miss the Senate vote on Judge Oetken’s nomination.”]

← Previous Story Panel Set for July 20 Senate Hearing into Respect for Marriage Act
Next Story → DOJ Argues to Keep DADT Repeal In Executive Branch’s Control, Out of the Courts