Playing in rep with Coriolanus, the Shakespeare Theatre Company’s Wallenstein offers another angle on a powerful military man falling fatally from grace. As extraordinary as the manic Coriolanus, albeit in a very different way, Wallenstein similarly finds he cannot reconcile his vision with the powerful realities and vagaries of the politics that dictate war. Whereas for Coriolanus it meant the end of his hope to rule Rome, for Wallenstein it means the end of a soldier’s wish to settle a long and bloody war with a pact that offers him great power. This is a rich and uncompromising pair of plays; each ready to be mined for relevancies and enduring lessons and equally worth comparing for the examination of the egos and aspirations of the men at their centers.

But as fascinating as they may be intellectually, neither is often staged and in the case of Friedrich Schiller’s Wallenstein, for good reason. Even reduced from its multi-hour running time by poet Robert Pinsky’s adaptation, it has a plot dense enough to leave even season-ticket holders breathing into a paper bag. Presenting, at times, like an opera minus the emotionally revealing and gratifying score, it’s easy to see the challenge in delivering a production that is not just comprehensible, but also engaging.

But that’s all the more reason to laud this production, for not only does Pinsky condense the drama to its tensest core, he boldly and cleverly freshens its solemn historical premise with an irreverently modern voice. Thus, Wallenstein himself addresses the audience as a contemporary when he is not immersed in 17th century crisis and right from the get-go dismisses any suggestion that one need know the ins and outs of the Thirty Years’ War. The hardcore purists may balk, but everyone else will relish an accessible distillation of Schiller’s conflict that doesn’t require a minor in European history or the missing of a day’s work. 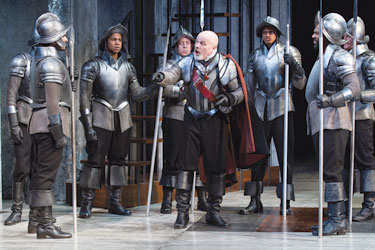 Steve Pickering, as Wallenstein, and the cast

And who better to direct than Michael Kahn, who has a gift for the particularly difficult? Bringing clarity and vision to pieces, of whatever century, that refuse to cater to the lazy mind, he is the perfect executor of Pinsky’s gleefully liberal adaptation. Where in other hands things might turn smarmy, here Kahn ensures in pace, rhythm and delivery, the kind of wry and compelling mood that reminds rather of an old Hollywood film. The dialogue is snappy, the jokes quick and the demeanors flip between jokey and deadly serious. It’s an approach that, with Pinsky’s craft, opens Schiller’s rather relentless plot to humor, irony and an engaging unpredictability.

Yet even with these strengths, this is still a difficult piece and it sometimes wrests free of Kahn’s sophisticated hold; not every awkwardness of Schiller’s plot can be smoothed, not every actor can negotiate the terrain between Schiller’s world and Kahn’s. Thus, there is at times an unevenness, even if the vigor, verve and imagination of this production well outweigh it.

And Schiller offers a riveting character in Wallenstein. Unlike the rash Coriolanus, Wallenstein judges his acts like chess moves. Even as he draws his sword, he wants to know where it will lead, what will be lost, what gained. And whereas Coriolanus drags a damaged psyche like a ball and chain, Wallenstein is made heavy with the weight of his actions on others. And not unlike Shakespeare’s Titus Andronicus, he looks to the stars for rhyme and reason in senseless death.