Every night just before performing his one-man show, Jorge ”Jay” Alvarez has a moment of panic.

”Oh my God, do I have this in me again?” he laughs. ”But I figure if my father could do what he did, I could certainly stand onstage for an hour.” 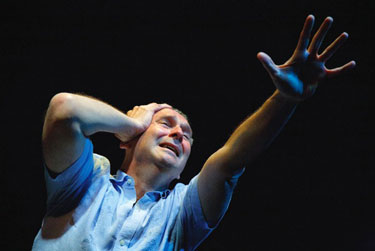 Now playing at Alexandria’s MetroStage, Be Careful! The Sharks Will Eat You! vividly, passionately tells the story of exactly what Alvarez’s father Humberto did. ”He planned and executed the escape of 28 people from Cuba in a boat under the cover of a moonless night,” as Alvarez puts it. A natural storyteller, Alvarez impersonates his various family members, including his mother Chiqui, and the people they encountered as they made their escape to America in 1964, soon after Fidel Castro came to power.

”It’s an homage to my parents,” he says. “A love letter to them, as a friend of mine in L.A. puts it.” The idea for the show sprang from listening to a recording that his late father left behind about the adventure. That inspired Alvarez to write conversations he imagined taking place. Fellow actor and director Theresa Gambacorta eventually encouraged him to develop the material, and helped him whip it into one-man shape. After a start in New York in 2010, it’s gone on to multiple engagements in Los Angeles and Miami, among other cities.

The story of Sharks has broader appeal than it might initially sound. ”It’s Cuban-specific,” notes Alvarez, ”because it happens to be a Cuban family in this particular time in history. But it’s the American story in many, many ways.” And through an epilogue it specifically explores the duality of many Americans’ lives. ”I’m 100 percent both Cuban and American,” Alvarez says. ”One did not take away from the other.” That’s almost a radical idea, Alvarez says, ”in this highly polarized world that we live in,” in which newer immigrants are afraid of losing their original identity and older generations of Americans forget how hard it can be to assimilate.

Alvarez is also gay, but coming out to his family was ”uneventful,” in part because his older brother beat him to the punch. ”The whole gay thing is,” he says before a long pause, ”unimportant to me. Being gay is just one of those things you happen to be in life. I’m Cuban, and I’m American, and I happen to be gay.”

Alvarez was 4 when his family emigrated from Cuba, and after a couple years living in New York, they settled in Miami. It wasn’t a given that he’d become an actor. ”I guess as an immigrant kid,” he says, ”I never thought, ‘Ah, actor.’ I mean, what is that? I can’t be an actor.” Eventually he did get bitten by the bug, though – when he moved to D.C. at the turn of ’90s and started taking classes at Studio Theatre and then getting small parts in shows at Source, GALA and the Kennedy Center, with Shear Madness.

These days Alvarez splits his time between New York and Los Angeles, and has been seen in small roles on Fox’s Til Death and HBO’s The Sopranos. This summer he’ll star in a new play in New York by Richard Willett, Tiny Bubbles.

That will be in addition to doing another run in New York of Sharks, which he’s also working to adapt as a full-fledged musical. Latin jazz legend Paquito D’Rivera, a fellow Cuban American, has recently signed on to write the score for the musical.

”I think it has a lot of really big themes that would work very well for a musical,” says Alvarez – from the essential love story at its heart to its quest for a better life. And of course, its eventual happy ending.

”Can’t you just see the musical number,” says Alvarez, ”when the parents are sending their children away at the airport [before the escape to America]? That alone is like, ‘Okay, intermission, I need a glass of wine!”