Rick Stafford, LGBT caucus chair and activist, hosted the event alongside Raymond Buckley, the first out gay president of the Association of State Democratic Chairs. Stafford noted that this is his 10th convention and his ninth as an out gay politician. The caucus itself highlighted the immense progress made by the LGBT community since Barack Obama won the White House, particularly the visibility gained by the number of LGBT officials elected to public office over the last few years. 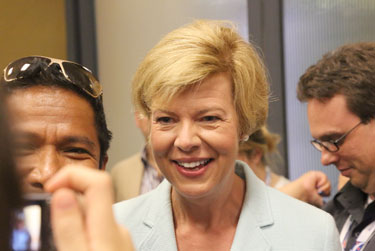 ”The sheer size of this caucus is but one example of the progress we’ve made toward equality,” said Baldwin who, if elected, will serve as the first openly LGBT member of the U.S. Senate.

Further cause for celebration came from the release of the Democratic Party platform earlier Tuesday, which contained a plank affirming the party’s commitment to marriage equality. Many attendees were visibly moved during the caucus, as the party’s support for marriage equality evidences the culmination of decades of work for many veteran activists.

”I wanted to be here,” said Weingarten during her speech, ”not just as a lesbian, not a member of the LGBT caucus, but as a member of the platform committee when the marriage plank passed without any dissent.”

The obvious theme of the meeting was that the LGBT community must re-elect Obama, unifying all speeches during the caucus. Multiple speakers emphasized how virtually all progress on LGBT equality during the past decade could be lost under a Mitt Romney/Paul Ryan administration.

”There has been a lot of progress in a relatively short period of time, but there is still a lot more to do,” said U.S. Secretary of Health and Human Services Kathleen Sebelius. ”November is the most important election of your lifetime – and my lifetime.”

Sebelius also highlighted the importance of the Affordable Care Act and the imperative nature of the legislation for the LGBT community.

Steve Kerrigan, CEO of the Democratic National Convention Committee, was the final speaker at the event. Kerrigan is the first out gay man to serve in the position.