Nancy Robinette is currently playing a part that a knighted British actress once touted as a pinnacle role for actresses, akin to Hamlet for male actors. And in that sense, Robinette playing Winnie in Happy Days makes a kind of sense. Robinette is, after all, the reigning grande dame of D.C. theater. 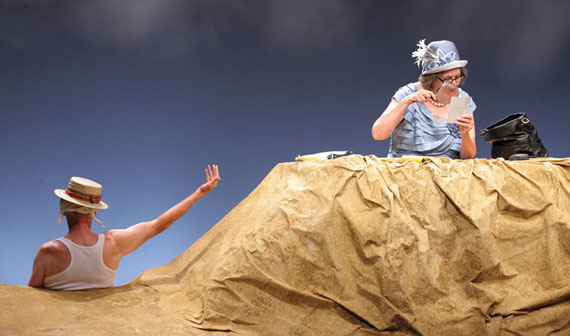 If only the role of Winnie made a kind of sense. If only Happy Days, the Samuel Beckett tragicomedy that Scena Theater is producing at the Atlas Performing Arts Center, was worth the trouble to see. But even if you know what it’s about — or supposed to be about — going into it, chances are you’ll still leave feeling at least a little bewildered by the whole affair. Or even a little disgruntled, especially once you learn that was, in fact, the Irish playwright’s intent all along.

Beckett was celebrated in the post-world war period of the mid-20th century for his work in helping pioneer what came to be known as the “Theatre of the Absurd.” A branch of the modernist movement in art, this absurdist style is essentially the opposite of the traditional, satisfying method of storytelling, in which things actually happen, meaning gets imparted and there’s a sense of resolution about it all. There’s none of the sort in Happy Days. Winnie is buried waist-deep in a mound of dirt at the play’s start, and by its end, about 100 long minutes later, only her head remains exposed on a sunbaked, barren beach. There’s no explanation for how she got there, or why her companion Willie (Stephen Lorne Williams) won’t help her out, instead leaving her mostly alone. 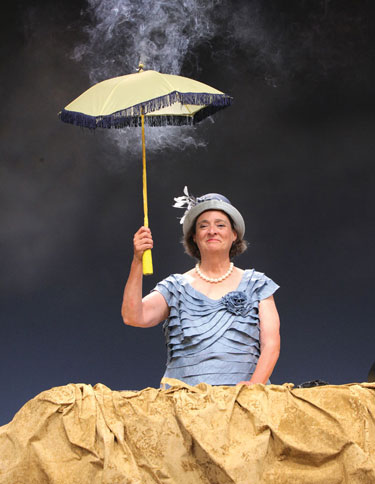 Of course it’s all meant to be a metaphor. Winnie is living an ordinary, lonely life, taking increasing pleasure — and pain — in the most routine of occurrences, existential trappings and material goods, the latter of which can be easily tucked away in her oversized handbag. Eventually she’ll sink and become consumed by the great big world that surrounds her — as will we all. In Winnie’s relentless optimism and loquacious nattering — and Willie’s contrasting dour detachment and laconic communication — Beckett seems to be offering dated commentary on gender. (And it has been suggested that this play was Beckett’s retort to his wife’s request for a happy play.) But he also seems to be commenting on the absurdity of life and the different ways people cope.

Ultimately, you may cope with the absurdity of this play better than I did. You may even forgive some of the oversights of this production, directed by Scena’s Robert McNamara. Why, for instance, did designer Michael C. Stepowany use stretched beige fabric to evoke sand on a beach, rather than actual sand or dirt? But you certainly won’t leave with anything but appreciation for Robinette’s work. No doubt she’s far from the pinnacle of her career.

ED DIXON WON A HELEN HAYES AWARD the last time he appeared on Signature Theatre‘s stage, portraying Max in the musical Sunset Boulevard. Now he returns to the Shirlington showplace to play a dozen characters — in his very own musical, Cloak and Dagger, a spoof of whodunit mysteries from the mid-20th century. The focus is on Nick, played by the overly polished Doug Carpenter, a third-rate detective in New York, who battles the mob and other assorted characters in his quest to find a missing golden statue, a Golden Venus seemingly modeled after Helena Troy, a blonde bombshell who becomes his client and love interest. Stunning Signature star Erin Driscoll plays Troy in full girly glory in this world premiere production directed by Signature’s Eric Schaeffer.

Cloak and Dagger will ultimately win you over, especially with its touching and particularly funny finale, which only comes after a whole series of madcap shenanigans — plus the great mid-show number “Shake Your Maracas.” Dixon and Christopher Bloch both assume multiple roles, many of them in questionable taste — stereotypes of first-generation Americans of Chinese, Indian, Cuban and Italian descent. But most of the jokes are with the characters, and not at their portrayal. And the funniest moments are of Dixon in drag, portraying, ahem, “A Real Woman.” Some of the jokes are forced or familiar, but nothing egregious.

The music is perfectly pleasant and hummable, and the Signature team of designers, led on sets by Daniel Conway, has done its typical up-to-snuff job in allowing you to escape into a world of exaggerated reality much as if watching a black-and-white detective movie — with the occasional pop of color from the golden statue and the blonde-haired and red-dressed Driscoll (costumes by Kathleen Geldard). Without giving anything away, there’s thankfully not much innocent about the whole shebang.