I hope you enjoy our first-annual coverage of Capital Fringe. And I hope it inspires you to go to one or more of these shows 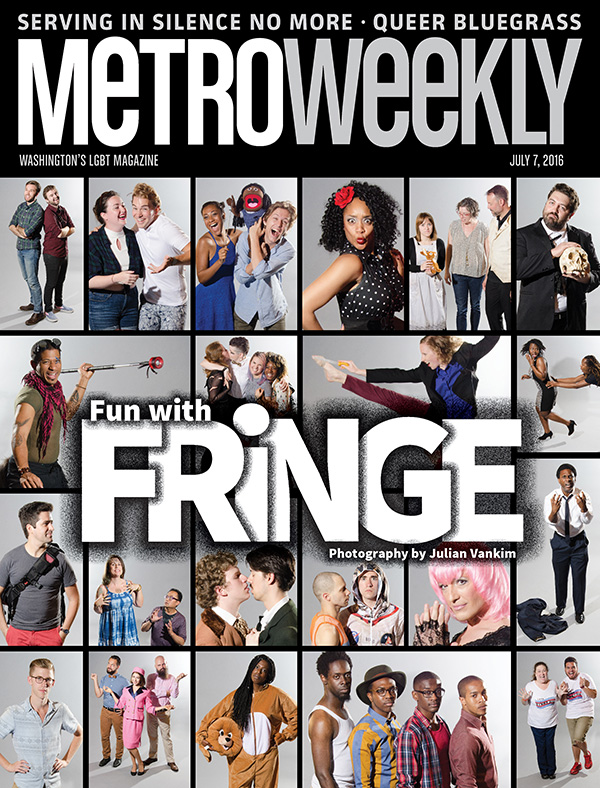 A month ago, at the opening reception for “Uncovered,” an exhibit of Metro Weekly cover art created by Todd Franson and Scott G. Brooks, Chris Griffin, a longtime arts acquaintance, handed me a postcard for a show he was directing at Capital Fringe. Dial R for Robot, he said, was an homage to Hitchcock’s Rope. Was it a comedy, I asked? “Not really,” came his response, “but you know me.” Meaning, it was bound to land on the bizarre side of things.

The postcard got me thinking about Capital Fringe, an annual, theatrically-driven, performing arts festival that has exploded since its founding in 2006. Metro Weekly had only put Fringe on the cover once, in 2007, when our former theater critic Jonathan Padget produced a musical parody of The Blue Lagoon. In the ensuing years, we covered Fringe shows here and there, a smattering of callouts for a specific artist or show, but nothing of significance.

A bad I aim to correct with this week’s issue.

First things first. It’s impossible to cover 117 productions meaningfully. Still, we asked 41 productions to participate in a photo shoot last Saturday at Fringe’s Trinidad stage in its casually appealing Logan arts space. Over the course of four and a half hours, various members of the productions — writers, directors, producers, actors (some in costume, some not), even a stage manager standing in for an actor who couldn’t make it — paraded before Julian Vankim’s camera and cut loose. Some tried to convey themes from their show, while others simply came to spread a little theatrical exuberance.

The original plan was to pick the best dozen or so shots from the day and funnel the remainder online. That was quickly abandoned at day’s end, when I said to Todd, “We’re going to publish them all.” To which he responded, “How?” “We’ll add another eight pages to the issue.”

The resulting cover story, “Fun with Fringe,” runs for twenty pages in the magazine. It attempts to capture in portraits what mere words often fail to adequately convey — that Fringe is a big, crazy, vibrant mix of everything. It’s nutty. It’s political. It’s got a point of view. It’s got no point of view. It’s ambitious. It’s thought-provoking. It’s as mad as a march hare. It’s fringe.

As an LGBT publication, we felt we had an obligation to showcase productions with a queer angle — but we went well beyond that. Some of these productions have no LGBT content whatsoever (we’ve indicated those that do in our quick reference guide). To be perfectly frank, focusing only on the LGBT side of things is never really been the rule at Metro Weekly. We’ve always embraced all facets of the arts and the people who create them. The way we see it, if we find it interesting, so will our readers. It was a unique approach to take in 1994, when LGBT publications were (and still are) ghettoizing their arts coverage, only featuring someone if they identified as openly gay. Not here. Not now. Not ever.

We’re also strong believers that all forms of entertainment should strive for a semblance of quality. Just because something has an LGBT angle doesn’t automatically mean it gets a thumbs up and a pat on the back. You’ll find no knee-jerk love in our arts and entertainment coverage (yes, Roland Emmerich, creator of Stonewall, we’re glaring at you).

And yet, Fringe festival productions are as much about taking a chance as anything else. You really don’t know what you’re getting in terms of quality when you take your seat — and that’s part of the fun. Yes, it could be utter crap. But it also could be the most brilliant show ever, the next big thing. Several of the productions have asked us to review their shows, but we won’t go that far — mainly because, if you’re going to legitimately review something, you need view it through an honest critical prism, not just because someone offered you free tickets to their show. And Fringe shows are still in a nascent stage. The festival is a seeding ground for talent, a way to put the creative process to the test, a means of discovering, with an audience, if you’ve got what it takes to advance your artistry to the next logical level.

I was genuinely astonished last Saturday by the level of enthusiasm and sheer, obvious talent that walked through the doors of our impromptu studio. True, I hadn’t seen their shows, but I instantly sensed that all of these folks were fully invested what they were doing. And sometimes that’s all you need to be truly great: Heart. Passion. Drive.

I hope you enjoy our first-annual coverage of Capital Fringe. And I hope it inspires you to go to one or more of these shows — or explore the 75 or so other offerings at capitalfringe.org.

Meantime, I’m already thinking up ways we can top this next year.

P.S. “Uncovered” is still on display through July 16 at Vivid Solutions Gallery, 1231 Good Hope Road SE. Check it out, if only to see what former Councilmember Jim Graham looked like when we dressed him up as Cleopatra.

Randy Shulman is Metro Weekly's Publisher and Editor-in-Chief. He can be reached at rshulman@metroweekly.com.
← Previous Story Waiting to Exhale
Next Story → An Endorsement for Hillary Clinton: We’re With Her