WNO’s “The Marriage of Figaro” (review)

Rocking no boats, "The Marriage of Figaro" is all about the music, the voices and the traditional

A cheerful, middle-of-the-road production, the Washington National Opera’s The Marriage of Figaro (

) is good timing for D.C.’s opera-going base. Artistic director Francesca Zambello may have an interest in contemporary American operas such as Appomattox and this season’s Dead Man Walking — and she may have made WNO history with last season’s mind-blowingly original Ring — but some will be glad to see that the traditional repertoire still has a seat at the table.

Thus, Figaro rocks no boats and is fully content to deliver an amusing evening of Mozart and his story of would-be lovers. There are no references to global warming, America’s troubled race relations or even a hint of a leather duster. With Benoit Dugardyn’s simple, almost austere sets, Myung Hee Cho’s colorfully-costumed singers, and the determinedly quaint shenanigans, this is all about the music, the voices and the traditional.

Of course, traditional interpretations are necessary and wonderful to the genre. But if you’re going to deliver it straight, then it’s time for flourish and flare. And quite simply, there isn’t a whole lot of that here. It’s a production in need of a bit more imagination, a bit more humor, and even a tad more of the ribald. Put simply, it needs the kind of goosing Count Almaviva saves for his favorite servant girl.

Not looking particularly enamored with one another, Ryan McKinny and Lisette Oropesa seem more co-conspirators than lovers in the roles of Figaro and Susanna. McKinny livens up his manservant with a fair bit of silliness and jumping about and also gives him some leading-man gravitas with his luxuriant bass-baritone. But what is he fighting for? Oropesa certainly looks the part, but she projects her Susanna as a servant who has seen it all and disdains a lot of it. It’s a portrayal that dampens her chemistry with Figaro and undermines her motives in helping the Countess Almaviva win back her husband. What sweetness there is arrives with her attractive soprano, but there is never quite enough in tone or expression to suggest any real sugar in the soul.

Drawing much of Susanna’s ire (and a fair amount of rather too genuine-looking flirtation) is the Count Almaviva. A good old-fashioned cad, the Count is all about reinstituting the tradition of droit de seigneur (co-opting village brides on their wedding nights) in time to get his hands on Susanna. Thoroughly savoring the role, Joshua Hopkins arrives like an 18th century Fabio, complete with flowing locks and a semi-bared, hairy chest. Though he is a tad under the orchestra at times, he offers an able baritone and much is mitigated by his charisma and comic timing.

For the smaller roles of Marcellina and Dr. Bartolo, both in search of late-life marriages, director Peter Kazaras misses another opportunity for colorful fun. Instead of letting Elizabeth Bishop and Valeriano Lanchas play it up, they are relegated more or less to irritated hovering. As Don Basilio, Keith Jameson has presence and vocal clarity, while Domingo-Cafritz Young Artist Ariana Wehr offers a fulsome soprano and brings memorable energy to her young woman Barbarina. In the trouser role of the young man Cherubino, Aleksandra Romano captures well the scampering lovesick adolescent, but her rich mezzo-soprano feels encumbered by the vibrato.

But as skillful as the ensemble may be, nothing moves the needle until the arrival of the statuesque Amanda Majeski’s Countess. Alone and melancholy, she sings mournfully of the faithless Almaviva with the crystalline beauty of a sorrowful Snow Queen. It’s a rare moment of magic in a long and largely pedestrian evening.

"The Marriage of Figaro" by Washington National Opera 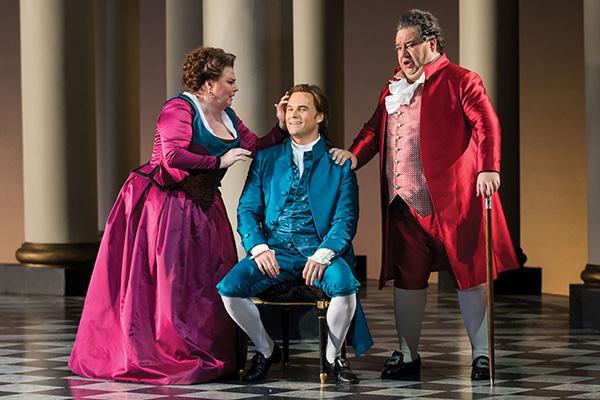 ← Previous Story Michele Angelini loves opera — and thinks everyone else should, too
Next Story → WNO’s “The Daughter of the Regiment”: Much needed respite from tumultuous times