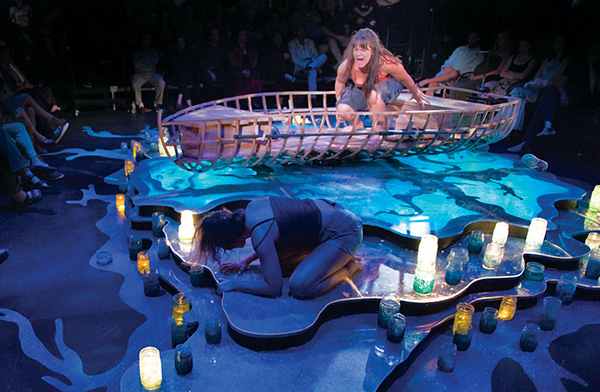 When a man and a woman are lovers in a play, “you don’t point out that it’s a heterosexual relationship,” Audrey Cefaly says. “You just watch it and enjoy it because there are two people in love.”

It’s a point Cefaly contrasts with her play, The Gulf. The drama focuses on two women in a lesbian relationship, and the playwright thinks it’s more than redundant to point that out. “When people label it a lesbian play, it diminishes not just the story but the idea of that kind of love in general,” she says.

If nothing else, love for The Gulf has been steady and swift, having its world premiere at Signature Theatre one year after the company gave the work its first staged reading. The Maryland-based Cefaly is also beginning to generate buzz for other plays that share similarities with The Gulf, including a setting in her native Alabama. “I want to go on anthropological digs into my history and heritage,” she says, citing Tennessee Williams and Matthew McDonagh as two chief influences. “I want to do for Alabama what Horton Foote did for Texas or Annie Baker did for Vermont.”

Cefaly describes her plays as mostly “intense, psychological dramas” told through “two-character pieces that allow me to focus on the intimacy and the tension between the characters.” It’s not always about love, however. In fact, Cefaly didn’t conceive of The Gulf as a love story at all.

“I had this image floating around in my head of two women on a boat, fighting brutally,” says the playwright, who is straight. “The more I pulled back to explore what could have caused this, the more I realized they were in some kind of relationship, because the only thing that would cause that kind of passion is love.”

As channeled on stage by Rachel Zampelli and Maria Rizzo, the result goes beyond what Cefaly imagined. “It’s sexy and fun,” she says. “Explosive and dangerous. An 85-minute rollercoaster ride.”