Tom Cruise dangles it all on the line (again) for a high-flying Mission: Impossible - Fallout 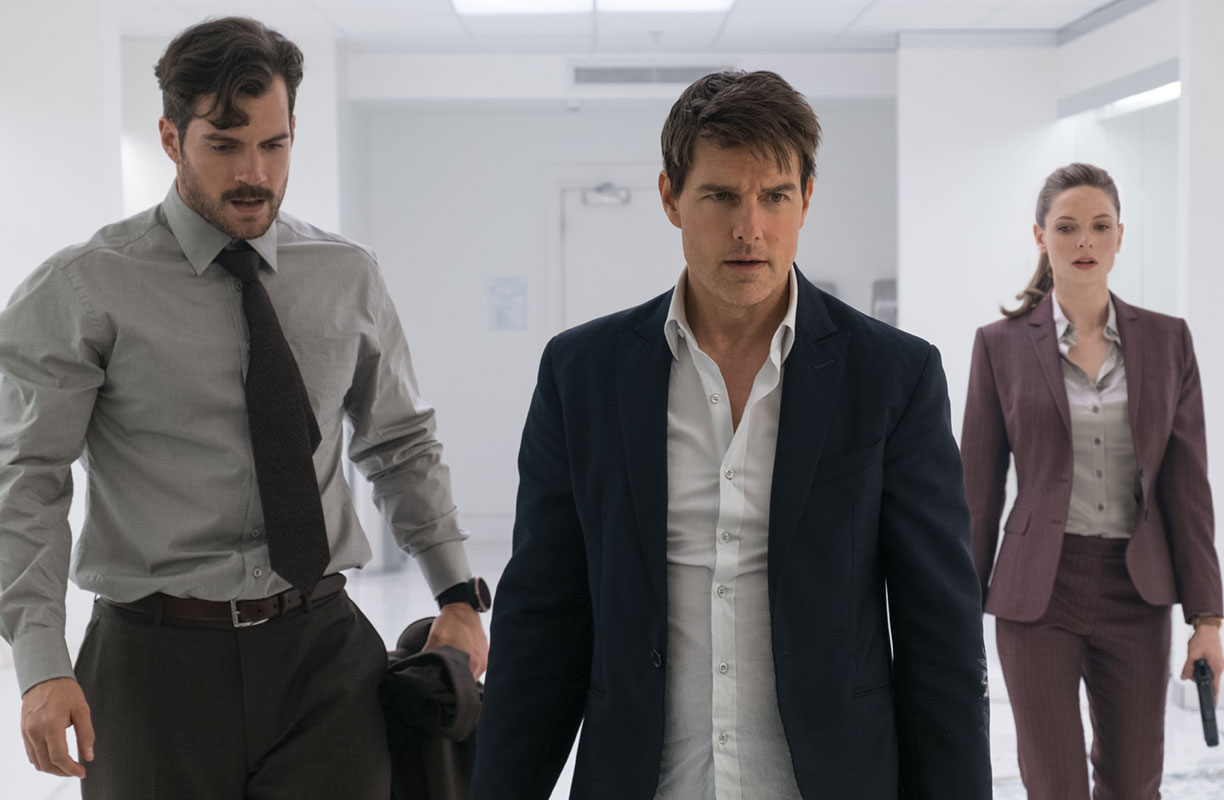 Outside of gifting the world one iconic heist scene of Tom Cruise, spread-eagle, zipping down from the ceiling, Brian De Palma’s 1996 summer hit Mission: Impossible left two lasting impressions: that the plot was infernally circuitous and that Cruise had found his franchise.

Five sequels and four presidents later, Cruise shows in Mission: Impossible – Fallout (★★★½) that he still cuts it as Ethan Hunt, lead spy of the super-secret, spectacularly well-equipped Impossible Mission Force. Hunt’s method of intense planning, running, and gritting it out to solve the world’s certain-doom problems suits Cruise’s nimble but no-nonsense approach to the character, to moviemaking, and to everything his audience sees him do in public.

He’s obviously done a heroic job maintaining a stake in assuring that these pictures are as fast-paced and exciting as their top-dollar budgets will allow. Part of the strategy has been to not try to fix what isn’t broken, like the famous Lalo Schifrin theme music. The flip side of that strategy has been the producers’ decision to hand the keys of each new M:I vehicle to a different director. But Cruise and company throw in a curveball for this summer’s outing, bringing back the series’ first repeat filmmaker, Christopher McQuarrie, who directed predecessor Mission: Impossible – Rogue Nation.

Accordingly, McQuarrie, an Oscar-winner for writing The Usual Suspects, picks up several threads left dangling in Rogue Nation. Providing the most direct story continuation of any of the sequels, Fallout resumes Hunt’s dalliance with British agent Ilsa Faust (Rebecca Ferguson).

Dalliance, which isn’t that strong a word, might still be too strong a word to describe the romance between Hunt and Ilsa. That they “care” for each other is explicitly stated, but only vaguely rendered. We’ll take their words for it, as they rescue each other one minute, and attempt to run Bimmers and motorbikes over each other a few scenes later. The two square-shooting spies can’t define their relationship any more than we can. And they don’t know — or aren’t revealing to one another all they know — about a plot to kill another Rogue Nation returnee, the nefarious ex-agent Solomon Lane (Sean Harris). 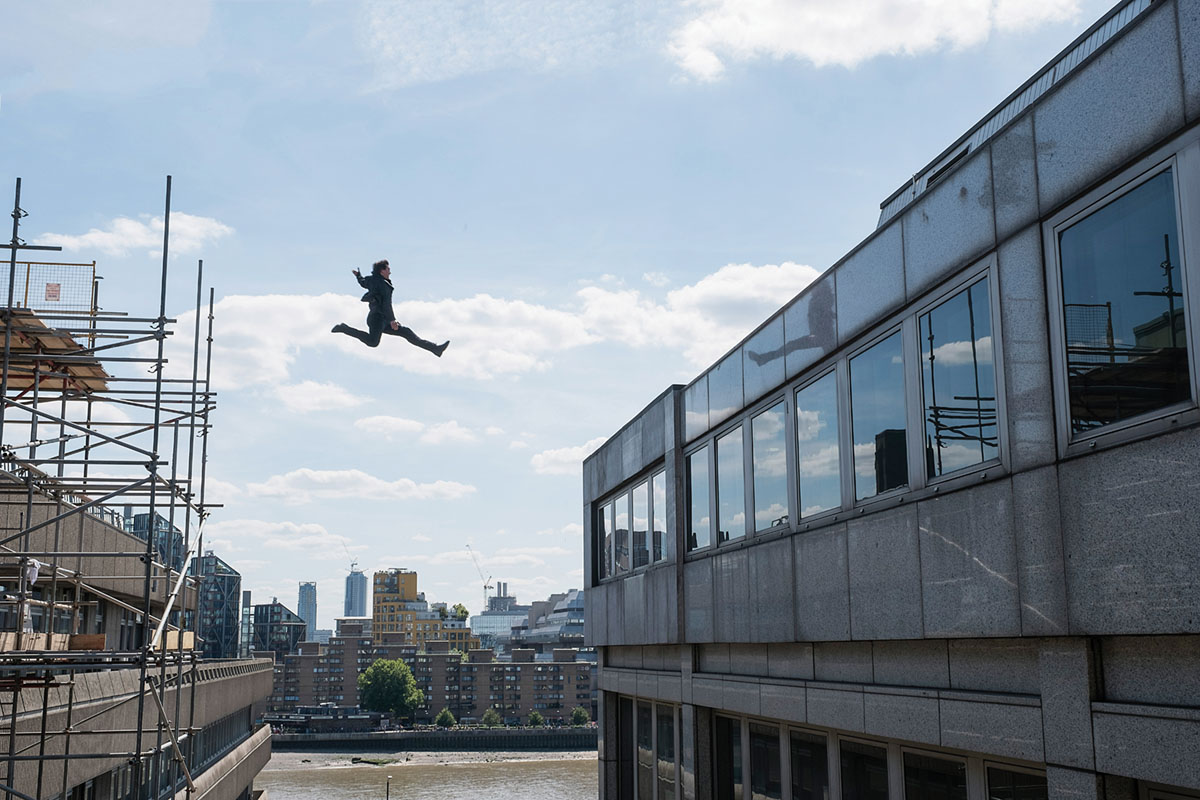 In the earlier film and in this one, Harris adds potent menace. The sheer creepiness of this unrepentant anarchist, fueled by random movie-villain rage against the system, helps balance cartoonish conceits like the IMF’s signature life-like rubber masks. The high-tech, deadly world Ethan Hunt inhabits wouldn’t be very scary or a lick as credible without a villain who seems like they’d actually wipe out a metropolis, and not just monologue about it.

But the movie has another evil mastermind up its sleeve, known only by the secret identity John Lark, who’s in the hunt for a cache of plutonium. Remaining offscreen, Lark might be any of the film’s cast of heavy hitters, including Simon Pegg’s returning sidekick, Benji Dunn, or spy chiefs played by Angela Bassett and Alec Baldwin.

Hunt’s friendly foil most of the running time is surly agent August Walker, portrayed by DC’s current Superman, Henry Cavill. The style and size difference between Hunt and Walker is shot for maximum contrast by cinematographer Rob Hardy. There’s also lens flare for days, and a percussive precision to the stunts and action, whether Hunt’s brawling in a nightclub men’s room, hanging off the side of a building, or dangling from a speeding helicopter. 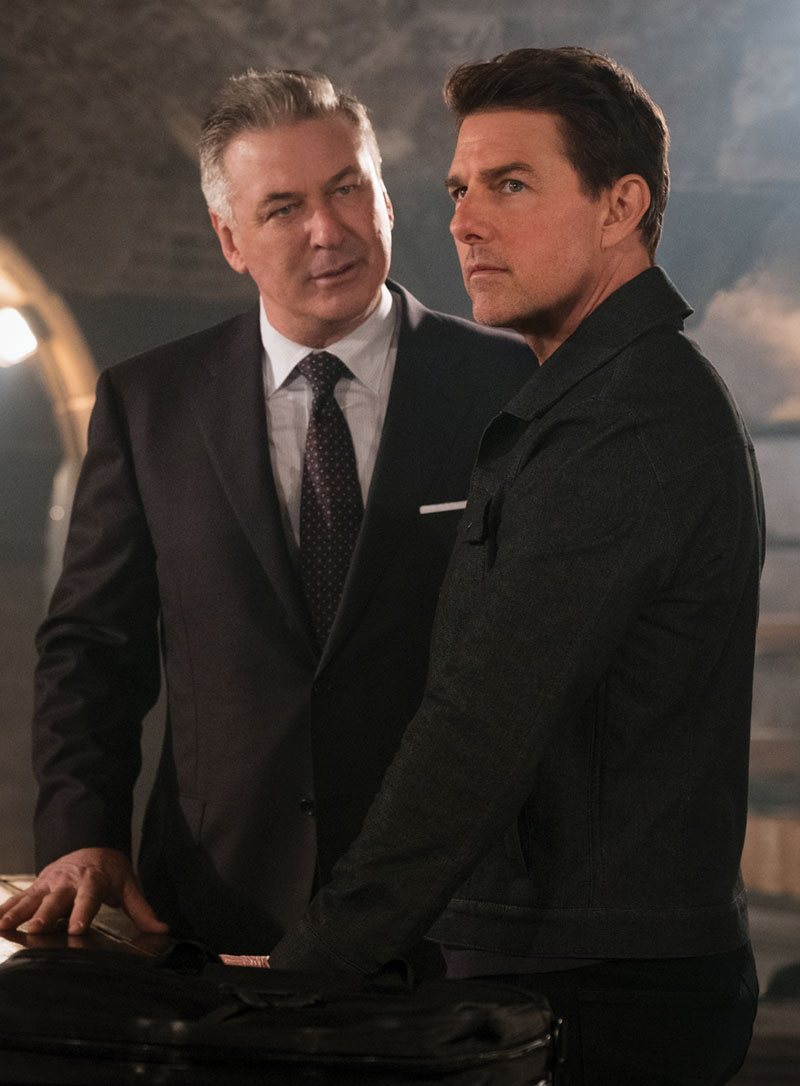 McQuarrie has prospered in the Tom Cruise business of late, directing and writing for the actor’s Jack Reacher films, among other projects. The filmmaking duo concocts an intriguing direction for Ethan Hunt here, by having the licensed killer attempt to hold himself to a higher standard when weighing the cost of any life he might take or sacrifice. That doesn’t stop the bullets from flying willy-nilly, but it adds a pound of meaning.

Supplying gravitas is in the job description for Ving Rhames, returning for his sixth appearance as IMF agent Luther Stickell. It’s warm comfort to see Rhames back, but unfortunate that Luther spends so much screen time just talking about how capable Ethan is, or telling people how Ethan’s doing. Half a dozen movies in, Luther should have more of his own thing going. Alas, Fallout and its characters, even the resolutely independent Ilsa, revolve around Ethan Hunt.

Cruise, no surprise, pulls off Hunt’s derring-do with aplomb, but, for some viewers, the screen Maverick might be upstaged by Cavill’s epic pornstache. The whiskers contribute to the characterization, as pummel-first, ask-questions-later Agent Walker looks and carries himself exactly as he’s described, like the hammer to Hunt’s scalpel.

Written and played as being not terribly swift, Walker’s blunt, bruising physicality might be his most memorable trait, if it weren’t for the Magnum ‘stache.

André Hereford covers arts and entertainment for Metro Weekly. He can be reached at ahereford@metroweekly.com. Follow him on Twitter at @here4andre.
← Previous Story Kimberly Reed’s “Dark Money” highlights the terrifying anonymous money influencing American elections
Next Story → Film Review: The Spy Who Dumped Me