Adapted from a novel by Robert Harris, Roman Polanski's The Ghost Writer is a political thriller of the highest order

There are so many mysteries on the island that it feels like you’re never going to get any answers. Is there a safe way off? Can the others be trusted? And are dead people really trying to speak to the living? Just when your head starts to spin, you remember that Ewan McGregor is a writer, not a detective, and you’re watching The Ghost Writer, not Shutter Island. Or Lost. 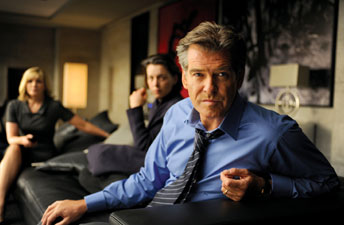 Yes, another island-based mystery. This time, instead of a trippy physiological thriller, it’s a high-profile scandal involving sex, grandstanding politicians, and a guilty man seeking asylum from those who wish to prosecute him. And we’re just talking about the director, Roman Polanski — we haven’t even gotten to the film yet.

Adapted from a novel by Robert Harris, The Ghost Writer is a political thriller of the highest order. The Ghost (Ewan McGregor), never named, is hired to write – or rather re-write – the memoirs of former British Prime Minister Adam Lang (Pierce Brosnan), when the ghostwriter who drafted the first manuscript is found washed up on the shore. Only hours after the Ghost joins Lang’s team in the states, Lang is accused of crimes against humanity for turning over terror suspects to the U.S. for torture.

Virtually trapped on Martha’s Vineyard and sandwiched between Lang’s wife Ruth (Olivia Williams) and his dominating assistant Amelia (Kim Cattrall), the Ghost is in over his head. The more the Ghost questions what he’s told to write, the more peril he encounters.

Like Shutter Island, The Ghost Writer pays homage to Alfred Hitchcock with its careful, methodical style. It’s clear from the opening scene of a boat approaching the rain-drenched island that Polanski’s direction is going to carry the film. Every shot has a crystal-clear perspective, and the slight changes in focus during even a single scene bring a subtly to the film lacking in more fast-cut editing. Rather than rely on cheap stunts to heighten tension, Polanski depends on mounting unease to create a slow build so subtle at times that you don’t realize you’ve been holding your breath until you’re desperate for more air.

Harris’ well-crafted adaptation, which he penned with Polanski, is a bit hokey at times (some of the biggest revelations are found via Google) and the whole plot hinges on a tenuous concept. But those small quibbles aside, it’s incredibly captivating. It’s also filled with a wry wit that’s less punch lines and more smart situational asides. It’s a humor that requires close attention to catch, but it’s worth the concentration.

McGregor performs with great tenacity. He’s at once the everyman thrust into a situation he can’t understand and also a man who isn’t going to be threatened or intimidated by his own government. Though the Ghost hunts down the truth with the same carelessness of a sexy bra-wearing blonde seeking out a strange noise during a horror flick, McGregor brings boyish-charm and a touch of earnestness to the role.
Brosnan is equally strong as the former prime minister, ranging from calm to irate in seconds, turning the charm on and off when Lang is in the public eye.

But really the best performances in the film are by the women. As Lang’s personal assistant, Cattrall is wonderfully fun and sexy. Though her British accent slips and slides more than her hips, she manages to be a coy femme fatale and a hard-nosed political operative. Watching Williams bring the sidelined Ruth to the foreground is mesmerizing. Assuming that certain events are inevitable, the slow tango towards the endgame is in large part so gripping because of the actress. The film lags a little in its pacing just past the half-way mark, and it’s Williams’ sly portrayal that brings it back on track.

Polanski clearly has something to say with The Ghost Writer, and since he was editing it from confinement that’s no surprise. The anti-U.S. vibe in the film is strong. The tenor feels very late-Bush Administration (the novel was released in 2007), when questionable actions by the government were known, yet the politicians still defended their actions with angry, red faces. This sentiment is deeply embedded in the heart of the story, but even at its most heavy-handed it’s never too much. Instead, it’s like an evil deed that, once committed, will forever haunt you. Small wonder Polanski captures the concept so well.