”It’s a real mix, and a real attempt to bring our local artists together,” says Quique Aviles. The actor and performer has essentially created a Latino arts festival, which he’s calling Occupy GALA, drawing inspiration from the Occupy political movement. Says Aviles, ”It’s a way to bring the community together to witness art that has some type of social [justice] content…. [It’s] an opportunity to take a peek at a multicultural D.C. that a lot of people don’t necessarily see.”

The festivities take place in and around the GALA Hispanic Theatre in Columbia Heights, including Latin drumming on the sidewalk and art installations in the theater’s entrance and lobby. But the central focus is on performance artists and musicians taking the GALA stage. Machetres, Los Nayas and Anexo Social are among the headliners, ”a mix of punk and reggae and rock.” The Andean music group Rumisonko, popular in D.C. a couple decades ago, will reunite for the event. The band, says Aviles, ”was part of the first wave of Latino lefty artists who came here fleeing military dictatorships.” 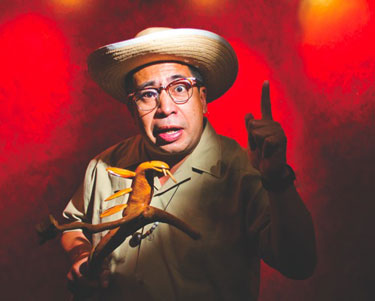 In between performances, a DJ will spin a wider mix of Latin music, including salsa and merengue, encouraging patrons to dance. Aviles will serve as show emcee, playing Don Ama, a funny character the El Salvador native created as part of a performance at GALA a couple years ago. ”He’s an old man, in his 60s, from the countryside.” An unlikely champion of rock ‘n’ roll, Aviles conceived of Ama as an ”international celebrity talking about injustices he’s seen around the world, putting this whole [show] in context.”