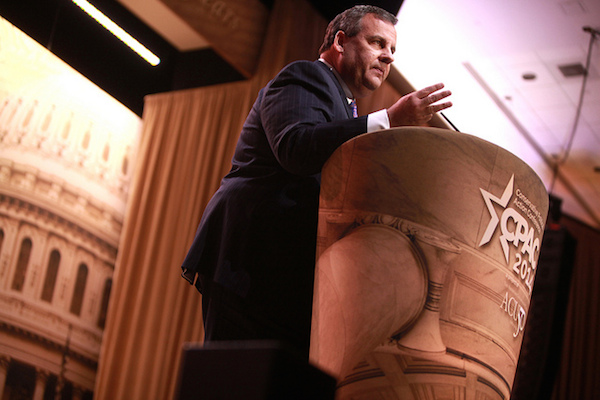 Gov. Chris Christie is the target of a new online ad campaign attacking the New Jersey Republican for his judicial record.

Launched by the Judicial Crisis Network earlier this week, the conservative group is spending $75,000 on a digital media buy in Iowa, according to The Washington Post.

“New Jersey’s Supreme Court has been one of the most activist courts in the nation,” the ad’s narrator states. “Over and over, Governor Chris Christie promised he would fix it, remake the court with judges who respect the rule of law. Over and over, he broke his promise.”

The ads and website, www.christiebadonjudges.com, come after Christie announced in May he would renominate New Jersey Supreme Court Chief Justice Stuart Rabner to the state’s high court as part of a compromise reached with Democrats in the state Senate.

Last October, Rabner, who was first nominated by Democratic Gov. Jon Corzine and confirmed in June 2007, delivered the court’s unanimous opinion denying a request by the Christie administration to put on hold a ruling by a lower court permitting same-sex marriage in the state while the case was appealed. Although the decision was not a final ruling in the case, which was expected to go before the high court several months later, the Christie administration looked to the 7-0 decision allowing same-sex marriages to begin Oct. 21 as a preview of how the New Jersey Supreme Court would rule when the justices reached the merits of the case. Christie then abandoned his battle over same-sex marriage, much to the chagrin of social conservatives.

Accusing Christie of “throwing in the towel on marriage,” National Organization for Marriage President Brian Brown said Christie had failed the test of a true leader “to walk a principled walk no matter the difficulty of the path.”

“Regrettably, Governor Christie’s decision to surrender on marriage reveals him to be a man who lacks the courage of his supposed convictions,” Brown said in a statement. “As far as we are concerned, it’s a disqualifying failure. His surrender on marriage effectively surrenders any chance he might have had to secure the GOP nomination for president.”

Family Research Council President Tony Perkins said that on its face, “it seems Christie not only yielded to judicial activism — but aided it by capitulating. Apparently, the Governor is giving up all hopes of identifying as a conservative in any future political aspirations.”

Following that criticism, Christie’s reappointment of the chief justice came after speculation that Rabner could face political retribution based on hostility Christie has shown toward the court in the past. Christie declined to reappoint Justice John Wallace, a Democrat and the court’s only African-American justice, in 2010. The move made Christie the first New Jersey governor since the ratification of the New Jersey Constitution in 1947 to not reappoint a sitting Supreme Court justice. Two years later, in 2012, Christie declined to reappoint Justice Helen Hoens, a Republican, as well. Christie has expressed a desire to reshape what he has labeled a “liberal activist court.” Christie faced pressure from LGBT groups such as Lambda Legal to reappoint Rabner and “not to play politics with the New Jersey Supreme Court.”

But as Christie continues visits to key primary states before an expected run for president in 2016, some conservatives say Christie’s actions aren’t good enough, further illustrating the challenges Christie could face in a Republican primary.

In an article published by National Review Online, Carrie Severino of the Judicial Crisis Network responded to remarks from a Christie spokesperson who said Christie has worked to make the court more conservative while dealing with a Democratic Senate.

Speaking to reporters last week at the the National Governors Association summer meeting, Christie vowed that the debate over marriage equality isn’t over.

“I don’t think there’s some referee who stands up and says, ‘OK, now it’s time for you to change your opinion,’” Christie said, according to Politico. “The country will resolve this over a period of time. But do I think it’s resolved? No.”

Nevertheless, Christie added that the issue is settled in New Jersey, stating, “When I know that I’ve been defeated, you don’t bang your head against the wall anymore and spend taxpayer money to do it.”