Home / Nightlife / Clublife / Put a Bonnet on It

Put a Bonnet on It 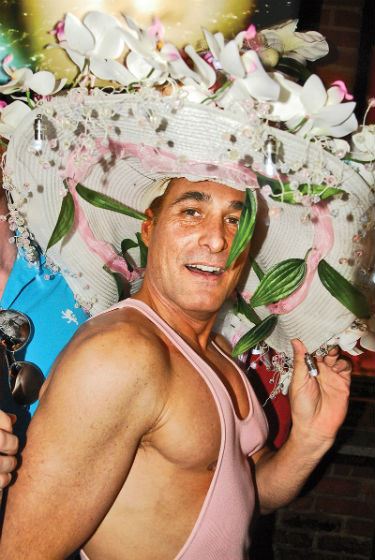 “People wear their Easter bonnets to church, you know?” David Perruzza says. “And JR.’s is located on Church Street, so it makes it fun.”

Of course, the bonnets you’ll see this weekend at the 17th Street bar won’t be at all like those you might see in a congregation. Toake just two examples, favorites from the 20 years Perruzza has been hosting JR.’s Easter Bonnet Contest: A topper in which one rabbit would mechanically bump another from behind, and a “Golden Showers” one featuring a bunny on top “peeing” a yellow stream leading to a puddle of gold on the front.

Another bonnet that has previously been seen at JR.’s is a frilly purple one worn by Freddie Lutz, owner of Freddie’s Beach Bar in Crystal City. Inspiration for Lutz’s most famous Easter cap came from a childhood friend’s lesbian wedding. “I went to her wedding and they had these purple and lavender poofs all the way down the aisle,” explains Lutz, who talked his friend into letting him re-purpose the poofs for a different kind of ceremony: He now wears it every year at Freddie’s Easter Bonnet Brunch — though not the whole time. “I usually do a little bonnet fashion show myself,” Lutz says, laughing, “I change just like Diana Ross.”

This Sunday’s Easter brunch at Freddie’s lasts six hours — an hour longer than usual — and those donning bonnets can enter a contest to win bar gift cards in amounts of $150, $100 and $50, announced later that day. “Of course I stole the idea from my good friend Eric Little at JR.’s,” Lutz concedes about his contest, which has taken place practically since the bar opened 15 years ago. Naturally, mad-hatters could enter both contests, since the JR.’s event, 28 years after Little started it, is set for 7 p.m. Sunday, with the winner fetching $250 in cash.

In fact, every year there is a lot of overlap between the two contests, even among those at the very top. Perruzza won Freddie’s contest six years ago, and more recently Lutz donned his bonnet at JR.’s. “No, I didn’t win — but I came close.”