When Whitman-Walker Clinic announced that it was ending it stewardship of the annual Capital Pride celebration and announced its search for a new host organization, the Pride Alliance stepped into the arena with a proposal to create a completely new organization to oversee the production of a volunteer-based Pride celebration.

That plan has come to fruition with the 34th annual Capital Pride celebration, the debut of the Pride Alliance’s 18-plus months of work and dedication. Bernie Delia and Michael Lutz headed up the original proposal for creating the Pride Alliance, and Dyana Mason joined this year as the group’s first executive director. With the start of Capital Pride just around the corner, all three sat down to talk about their goals — and dreams — for a successful Pride, both in D.C.and nationwide. 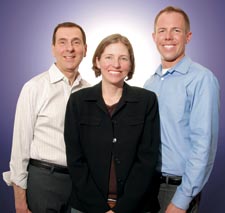 PRIDE GUIDE: It’s been about a year and a half since Pride Alliance first put together its bid to take the reins of Capital Pride. What were the goals you had going in, and do you feel like you’ve reached them?

MICHAEL LUTZ: One of the biggest things was the question ”Why can’t Pride be its own organization?” It kept coming up: you don’t have the money, the size, you’ll never get a 501(c)(3), you won’t be able to pull it off with an all-volunteer organization. And we decided to dispute everyone of those — and did so successfully. We set out this year saying our goal is to produce an equivalent, if not better, event than last year, and I would say with utmost confidence that it will be better than last year.

DYANA MASON: We have about three dozen events that are going on all over the city for more than 10 days of Pride. This is truly a community Pride. Everybody is contributing and participating to it, which has been really exciting.

BERNIE DELIA: What else is exciting is seeing a lot of organizations that want to join in with everybody else in putting events on. We’ve had a lot of requests from people saying, ”Can we also participate in Pride in some fashion?”

PRIDE GUIDE: What’s changed the most in the journal from proposal to reality?

LUTZ: At the very beginning there was some notion that we could not put on this year’s Pride solely on our own, that we were going to need a great deal of assistance from the Clinic or some other organization. But in fact, that has not been the case at all. We ran with it right from the very beginning.

DELIA: We put in many, many hours in pulling this all together — we just said we can do it. It’s sort of like the kid that starts walking for the first time and the parents are standing around thinking that they need to be hovering. Actually, they don’t — the kid is perfectly fine.

MASON: When I started two months ago, I think I was impressed with how far along most of the planning was already. These guys who have been working for the last 18 months were the reason we were in such a good position.

PRIDE GUIDE: How many volunteers do you have working for you?

MASON: With our committee chairs and the key leaders, there are about 30 or 40 people. Then with the rank and file volunteers who will be out there at the parade and the festival, there’s going to be 200 to 300 of those.

PRIDE GUIDE: How do you feel about the inclusiveness and diversity of this year’s Capital Pride?

MASON: We have been exceptionally diverse. This year has been really exciting. We’re co-hosting an event with DC Black Pride. Trans Pride is a part of Capital Pride this year and there are three confirmed trans-specific events, including Trans Pride itself. We have worked to make sure there is good ethnic diversity with the committees and on the Board.

We’re also doing a Family Section at the festival again this year, which is for families in our community to spend some time with their children. There will be the Stonewall Stage for young people who want to go and dance during the festival. We’re really working at trying to reach out to the broadest group of people possible.

PRIDE GUIDE: What do you think people will be most excited to see in terms of changes for this year’s Capital Pride?

LUTZ: We now have 10 plus days of events so there’s truly something for everyone. If they want to dance, there’s going to be plenty of parties. If they want to see the importance of Pride in Washington, there are events that talk about the impact on the community. We have Capital Pride After Dark, a big party outdoors under the sky at the Hirshhorn Museum and Gardens that has never been done before. We have bleacher seating for the parade, by the review stand and one by the announcement stand.

PRIDE GUIDE: In addition to this year’s Capital Pride Heroes, you chose to honor Frank Kameny and Lilly Vincenz as ”Super Heroes.”

DELIA: This is the 40th anniversary of Stonewall and we are celebrating that as part of our theme. We thought that it would be most appropriate to look back at two people who have really contributed a great deal to the community, as Frank and Lilly have, and give some extra special recognition to them, to honor their service and to acknowledge their particular contributions to the community.

PRIDE GUIDE: What it is about Pride that pulled each of you to become so deeply involved?

DELIA: I remember how important my first Pride was to me as a gay man coming out. Every year is somebody’s first Pride, and it’s important to put on a wonderful celebration of the rich diversity of our community.

LUTZ: If you asked me that in the beginning of 2001 I could not have told you. But I went to my first Pride in Washington in June 2001. Everything was almost overwhelming — but in a good way — and I was like, ”There’s a lot to be proud of.” So a few years later I wanted to get involved and from there it just snowballed very quickly.

MASON: We also have a unique position here in Washington — while it’s an event for everybody to come together and celebrate our community and our history, we’re in the president’s backyard on Pennsylvania Avenue, in the shadow of the Capitol Building. We have to take that very seriously that we’re more than just a community pride — we’re the nation’s pride. So we work to make sure that that is what we bring to the table.

PRIDE GUIDE: This is like asking a mother to pick a favorite child, but I should ask anyway. Is there an event that you’re looking forward to the most?

DELIA: The parade, because of the energy you feel both with participants and with folks lining the streets. You just get that wonderful sense of pride walking down the street with everybody there.

LUTZ: I think the festival is huge. It’s a landmark event. The first year I volunteered with it, I remember running up on stage for something and seeing that entire seven-block area filled with people celebrating. It was as much a demonstration as Stonewall was, but obviously under a much different context. There’s this huge energy and you’re like, ”That’s something to be proud of. We are part of something great.”

DELIA: I’m looking forward to the Pride After Dark Party at the Hirshhorn, because I think that’s our opportunity to kind of put the cherry on top of the week for everyone. That’s going to be a great event.

PRIDE GUIDE: Pride can mean different things to different people. What do you think Pride means for our day to day lives as LGBT people?

MASON: Coming out and being out is not only a very important personal decision but it is the only thing that can change the world. Pride to me is an opportunity to come out and celebrate together our community, our heritage and our history — but it also is a way that we can change the world. Folks see us on television, they read about it in the newspaper, they know somebody who went to a Pride event, and it encourages people to come out.

LUTZ: I think it’s a chance to reflect and say, ”I’m not only proud of who I am but proud of this community I have formed.” We’re a network of individuals who have that common denominator — we’re all different but at the same time we’re the same. We can go to any other city and say, ”Yes, I’m a member of the LGBT community. Yes, I’m gay, I’m lesbian, I’m bisexual, I’m transgender,” and be instantly be a part of that greater family. That global family is something to be proud of.

DELIA: A few weeks ago somebody asked me, ”Do you have an agenda for Pride?” And the answer is, ”No.” We are simply a reflection of the very diverse community that we represent here in Washington. Especially at the 40th anniversary of Stonewall, when we look back at past Prides and where we are today, it’s a rather satisfying to see that we started out as a little block party in Dupont, and how we have grown since. We look at ourselves differently now than we did 35 or 40 years ago, and where our place is in relation to our fellow citizens So Pride is a wonderful expression of both our past history where we’ve been and our hopes and aspirations where we want to be.

For more information about the Capital Pride Alliance, visit www.capitalpride.org.