Where do your film tastes lead you in warmer weather? Is it time for a buddy movie, romance or blockbuster adventure flick? Whatever you’re craving, Hollywood’s got your flavor. Be wary, however, as there’s likely to be a miss for every hit. Keep your sun-block and cinematic discretion at the ready, apply liberally. 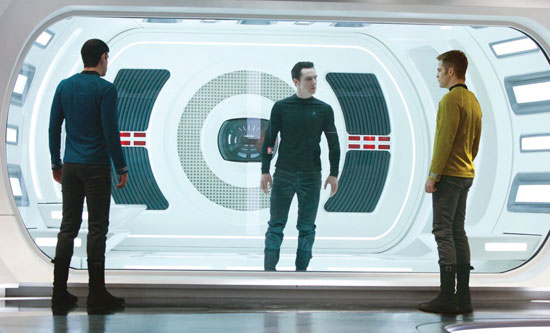 SPRING BREAKERS — “Springggg breakkkk forrrrevvvverrrr.” Harmony Korine’s latest calculated scandal-maker meanders between being the sort of movie you’ve never seen before and the sort of movie you never want to see again. One-time Disney stars Selena Gomez and Vanessa Hudgens play college girls who get roped into the scummy criminal life of a Florida rapper named Alien (James Franco). Yes, it is as ridiculous as it sounds. (3/22)

OLYMPUS HAS FALLEN — There are two action movies out this year about terrorists seizing the White House and holding the president hostage. One of these movies is directed by Roland Emmerich. This is not that one. (3/22)

ADMISSION — Tina Fey and Paul Rudd star in a romantic comedy about a Princeton admissions officer who thinks the gifted high-school student she’s recruited might be the son she gave away for adoption years ago. Blerg. (3/22)

G.I. JOE: RETALIATION — Here’s the thing about the sequel to a blockbuster movie: Nobody needs to know what it’s about. Retaliation probably has something to do with Joes and Cobras and whatever new toys Hasbro wants to unload this summer, but that’s not putting anybody in the seats. The Rock and Bruce Willis, though? That’ll do it. (3/28)

THE SAPPHIRES — An Australian musical comedy, set in the late 1960s, about an Aborigine girl group that sings for U.S. troops in Vietnam. Think That Thing You Do! meets Dreamgirls, with a sprinkle of M*A*S*H thrown in for good measure. (3/29)

TYLER PERRY’S TEMPTATION — I can convince you to not see this movie in five words: Kim Kardashian is in it. (3/29)

UPSTREAM COLOR — Seven years ago, Shane Carruth made a small movie about time travel. He called it Primer, and it broke nearly every rule there is about storytelling, exposition and narrative coherence. It was also the only movie he made — until now. All we know is that it’s inspired by Henry David Thoreau’s Walden and that the plot involves the life cycle of “an ageless organism.” Nonetheless, it appears to be as technically and artistically brilliant as Carruth’s debut. (4/5)

JURASSIC PARK 3D — Okay, Hollywood. It was cute when you started re-releasing great movies in 3D a few years ago. It was a decent gimmick. You’ve had your fun — it’s time to stop. (4/5)

EVIL DEAD — Scratch that — in Hollywood, gimmicks never die. This remake of Sam Raimi’s cult classic appears to have twice the horror and half the wit of the original. (4/5)

THE PLACE BEYOND THE PINES — Ryan Gosling, Bradley Cooper and Eva Mendes star in a crime drama about a motorcycle stuntman who robs banks to provide for his wife and newborn son. There’s talent behind the camera, too — Derek Cianfrance, of Blue Valentine fame, writes and directs. (3/5)

ROOM 237 — Heeeeere’s Stanley! The documentary, presented in nine segments, spellbindingly dissects the themes and motifs of The Shining. Interpreting one of the most baffling horror movies ever made is no small feat — theories about Kubrick’s intent range from allegories about the Holocaust to proof that the moon landing was faked — but whatever the reading, Room 237 will stick with fans forever. And ever, and ever…. (4/12)

TO THE WONDER — Yes, Terrence Malick is an acquired taste. Yes, The Tree of Life was a difficult movie. And, yes, To The Wonder will be just as challenging to watch. That’s still no excuse not to try. (4/12)

42 — Chadwick Boseman suits up as famed baseball player Jackie Robinson in this biopic also starring Harrison Ford and Christopher Meloni. Shockingly, this is the first major movie about Robinson’s life since 1950. (4/12)

OBLIVION — Tom Cruise stars as a former Marine-turned-drone-repairman who works on the scarred remains of Earth, decades after an alien invasion nearly destroyed the planet. Dystopian sci-fi, in all of its bombast, is an oddly fitting frame for Cruise’s nonstop intensity. Joseph Kosinski (TRON: Legacy) directs. (4/19)

PAIN & GAIN — Could it be? Is this … a decent-looking Michael Bay movie? Mark Wahlberg and Anthony Mackie play meatheads-turned-kidnappers in this swollen true-crime story, inspired by a 1999 story in the Miami New Times. Pain & Gain will be small by Bay’s gargantuan standards — he hasn’t made a movie with a smaller budget in nearly two decades. (4/26)

THE BIG WEDDING — An ensemble comedy based on the 2006 French movie Mon frère se marie, the movie pits Robert De Niro against Diane Keaton as a divorced couple forced to feign a happy marriage at their son’s wedding. Justin Zackham (The Bucket List) directs, so expect an awful lot of unthreatening, warm humor. (4/26)

THE ANGELS’ SHARE — A Scottish comedy by Ken Loach about a ne’er-do-well slacker who schemes to steal a cask of priceless whiskey. It was very well received at Cannes, so keep your eyes out for it. (4/26)

AT ANY PRICE — Zac Efron is still trying to be a ”very serious actor.” In this family drama, he plays a young man who doesn’t want to take over his father’s farm. Instead, he’d rather be a race-car driver. Sounds like a wise career choice. (4/26)

GIMME THE LOOT — Adam Leon’s debut feature about two Bronx teens who try to tag an iconic New York landmark with graffiti made a big splash at South by Southwest last year. A year later, it’s finally getting a wide release. Funny, quirky, and downright unique, Gimme The Loot could be the surprise hit of the season. (4/26)

MUD — Matthew McConaughey’s renaissance continues with this Mark Twain-inspired coming-of-age drama from Jeff Nichols (Take Shelter), where two boys stumble upon a fugitive and vow to help him escape the bounty hunters hot on his trail. If Stand by Me were made for an art-house crowd, it’d look like this. (4/26)