Happenstance Theater has devised a spooky hit with ''Cabaret Macabre''

”[Before theater] I spent a lot of time working on tall ships and traveling,” Sabrina Mandell says.

No, Mandell, founder of Happenstance Theater Company, isn’t acting, weaving a tall tale about tall ships. ”I grew up around the ocean in Nova Scotia, Canada, and had a real passion for sailing and things that are historical.” So becoming a deckhand, even a first mate on traditionally rigged schooners, while living in Charleston, S.C., came rather naturally. It was theater that was a stretch. 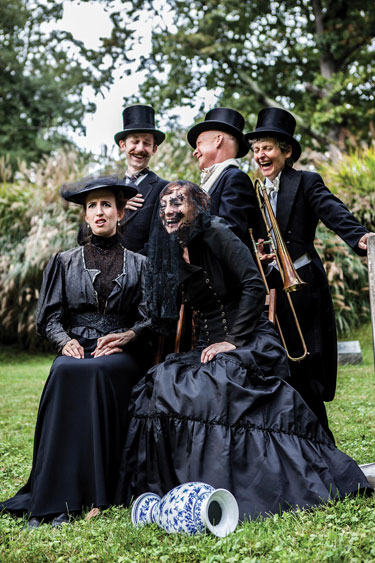 ”I grew up doing theater,” Mandell says, ”but I didn’t really like conventional theater. So I was lost for a long time about what kind of theater I wanted to do.” Drawn to D.C. by a teacher of the Lecoq Method of ”devised theater” — named after the pioneering French actor and mime Jacques Lecog — Mandell eventually decided to start Happenstance in 2006, enlisting her husband Mark Jaster as artistic co-director. ”What we actually do,” she says, ”nobody is doing … and it’s hard to describe.” Each devised theater show is built from scratch by the entire ensemble, working as a collective from script start to finished performance.

”It’s not like we start with an existing text, and then just need two weeks to mount the text,” says Mandell, who describes the popular annual show Cabaret Macabre as a perfect example of the company’s work. Reached one day last week, Mandell, who acts in every show, noted, ”I’ve been spending today sewing the costumes, and I do all the marketing.” Mandell describes the show as ”a series of dark comic vignettes inspired by the works of Edward Gorey. It’s basically an hour-long foray into the dark Victorian underbelly.”

The premise and most of the content of each year’s Cabaret Macabre is different, though there’s always an overture, a closing ”dance macabre,” ”absurd” scenarios featuring an actor mannequin — and a ”dangerous croquet battle.”