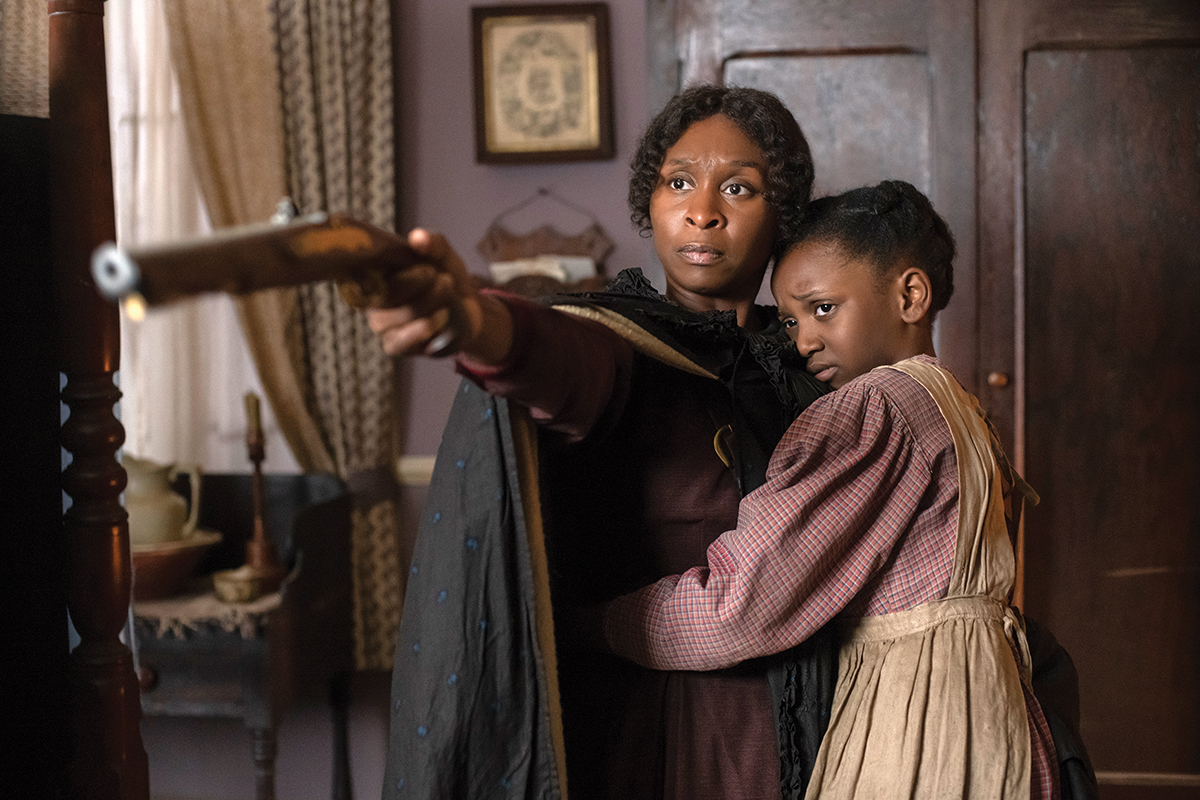 Considering that, as of this season, Hollywood has tallied five big-screen Jokers, just as many iterations of Little Women, and more Terminator movies than James Cameron could name off the top of his head, it’s about damn time Harriet Tubman, American hero, abolitionist, and spy for the Union Army, got her close-up in a big-budget, handsomely produced epic.

Born into slavery on a plantation in the Eastern shore of Maryland, Tubman lived to see the advent of cinema but she might never have imagined she’d one day feature as the subject of a major motion picture like Harriet (★★★☆☆), directed and co-written by a black woman, Kasi Lemmons. Then again, the woman who was born Araminta Ross and took the name Harriet Tubman when she took her freedom, might well have foreseen her daring 1849 escape played out on screens across the nation. As portrayed in this film, diminutive but determined young Tubman made her way on foot over 100 miles to freedom guided not just by the North Star, but by clarion premonitions sent by God.

Reportedly, divine intuition is how the real Harriet Tubman interpreted the spells and seizures she experienced after suffering a traumatic skull injury as a teen, and the Harriet script by Lemmons and Gregory Allen Howard (Ali) takes her at her word. So, occasionally, whether in solitary repose or running for her life along the Delaware River, Harriet — played by Tony and Grammy winner Cynthia Erivo — slips into a spell, and glimpses some fleeting but definitive sign of which direction to take in her journey, or in her life.

Monochrome flashes of the future, Harriet’s visions might in lesser hands inch too close to supernatural hokum, but Lemmons adds those strokes delicately to underline the freedom fighter’s unyielding faith in her God, in her mission, and in herself. Harriet’s spirituality is a fundamental element of her strength.

So Harriet might well have foreseen Harriet, and that one day Erivo — who followed her acclaimed turn in Broadway’s The Color Purple with the potent one-two punch of supporting roles in movie thrillers Bad Times at the El Royale and Widows — would come along as the ideal performer to play the part. A magnetic presence onscreen, Erivo captures Tubman’s nerve and guile, her iron will despite, or because of, the tremendous pain she carries in the scars on her body and in her psyche.

The film also makes excellent narrative use of Erivo’s marvelous singing voice, a tool Harriet uses to deliver messages from her hiding places. And, as Erivo proved playing a track star-turned-thief in Widows, she has already mastered the Cruise-ian art of sprinting with feeling through a long camera take. From her furrowed brow to her fleet feet, she physically inhabits the role of savior, leaving no doubt why Harriet was called Moses for leading so many to the promised land. There’s an undeniable fierceness to Harriet’s sense of rebellion, and her utter dismissal of the notion that she’s less than equal to any man — be it her loving husband John Tubman (Zackary Momoh), a freedman, or her callous master Gideon Brodess (Joe Alwyn).

John and Gideon are, for all intents and purposes, the two poles of her bleak existence in bondage on that Maryland farm. Yet, the film feels more alive once she and the action have escaped the failing Brodess plantation. Partly, that’s because the characters Tubman encounters further north, from dashing abolitionist William Still (Leslie Odom, Jr.) to refined Philadelphia boarding house proprietress Marie Buchanon (Janelle Monáe), are engaged in more vibrant lives.

And partly it’s just that the film’s time on the farm leans like an old woodshed towards a stock depiction of Them Ol’ Plantation Days. Steve McQueen’s 2013 feature 12 Years a Slave raised the bar high enough on realistic cinematic portrayals of America’s original sin to practically shut down the business of antebellum movie epics, unless a film is going to up the ante on insight or verisimilitude. Harriet doesn’t necessarily meet that standard with the one-note villainy of Gideon and his batty mother, Eliza (Jennifer Nettles), and the underdrawn family of enslaved folks who toil on the Brodess property, including Harriet’s mother Rit (Vanessa Bell Calloway) and sister Rachel (Deborah Ayorinde).

What the movie does accomplish beautifully, aided by lovely exterior cinematography and Terence Blanchard’s sweeping score, is convey how it might feel for Harriet to finally step into the land of the free, and to feel like she can’t rest until others know freedom too. A tireless crusader, she hiked, ran, and waded hundreds of miles in her lifetime to help deliver that taste of liberty to dozens of men, women, and children. It’s about time that movies caught up to her.