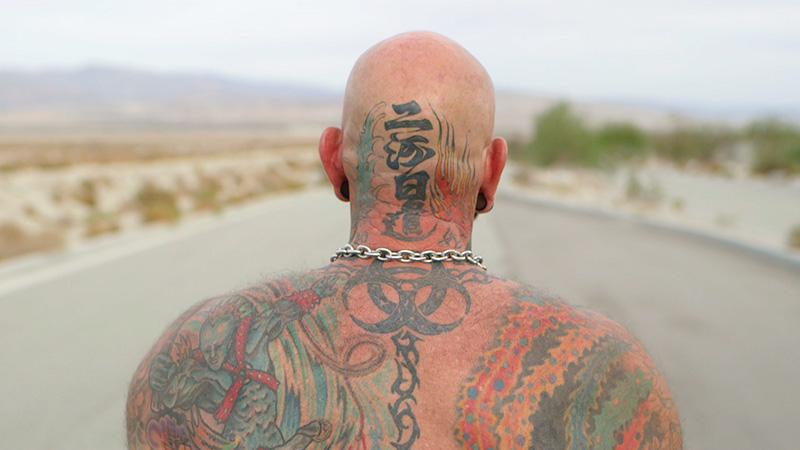 Desert Migration is not an upbeat film. It is not a joyous expose on the lives of gay men who survived the HIV/AIDS crisis. It doesn’t sugar coat history, it doesn’t mollycoddle its audience. It’s a frank look at life after a death sentence, and the struggle to survive that often entails.

Let’s get the most obvious thing out of the way: Desert Migration is not representative. It follows 13 gay men, mostly white, living with HIV and AIDS in Palm Springs. Their experience is not that of every gay person, or every straight person, or every person of color, or every woman diagnosed with HIV/AIDS. Writer/director Daniel Cardone specifically chose his 13 subjects to provide as cohesive a narrative as possible — and it completely works.

Cardone offers no commentary on his subjects. There are no facts, figures, or talking heads waiting to jump in. This is an entirely subjective, gorgeously directed rumination on life with a potentially fatal disease and its impact on every other facet of a person’s being. Each man narrates their experiences as Cardone follows them over a tightly edited day.

We watch as the men get ready for their day, be it to work, to work out, or to walk a dog. They detail their medications and their various ailments. They discuss wasting, fatigue, show us their sores and list the ways they’ve tried to maintain their bodies. It’s frank, eye-opening and far from the pervasive belief that HIV is now a once-a-day pill and no side effects.

Many of the men were told they would die. All watched friends die. “People would disappear,” says Doc. “You’d see them one week, then you’d seem them the next week and they’d look worse. Then you’d never see them again.” Some moved to Palm Springs with the belief that they too would soon pass, finding it a more comfortable place to waste away. “I wanted to die in a place that I really loved,” says Joel.

But they didn’t. Medications changed everything (“Just like Lazarus, we were back from the dead,” notes Keith) and suddenly those who had long since accepted their fate were forced to live again. With the absence of certain death, they had to think about love, work, paying bills, taking meds and having sex. Only with HIV/AIDS, there is the added stigma that society still attaches.

Michael, recently diagnosed with kaposi’s sarcoma, still won’t dream of his future for fear that God “would just snatch it away from me.” Steve, who lived through death, now contemplates suicide because the stigma of HIV has left him lonely, and the lack of financial aid has left him struggling to make ends meet. Eric, who used to measure his life in 5 year goals (“somewhere around 40 I thought ‘I’m not going to die of this'”), recounts younger gay men rejecting him for his status.

These men survived “a holocaust,” as Doc puts it, one that society has been all too quick to sweep under the rug, particularly younger generations. Desert Migration isn’t a fun film — indeed it’s a pretty depressing one at times — but it reminds us that there are those who lived through hell and came out the other side only to find that life isn’t always worth it.