Review: Dishonored 2 is an essential purchase

Four years ago, I called Dishonored a revelatory experience. One of the best games of the last console generation, its blend of stealth, action, strategy, supernatural abilities and deeply-ingrained karma system made it an essential experience for every gamer. Faced with the daunting prospect of trying to match that same level of quality and acclaim, developer Arkane Studios could be forgiven for taking the easy route and simply copying and pasting the events of the first game into a similarly dystopian place. That they didn’t, and have produced something that, while not as original as it was in 2012, manages to outdo the first game in almost every way is nothing short of incredible.

From a narrative standpoint, Dishonored 2 (

) treads some very familiar steps. Corvo Attano, the original protagonist, now protects Empress Emily Kaldwin, his daughter, after avenging the death of her mother in the first game. In the prologue, Emily is forced from her throne, with a vengeful, violent ruler taking her place — sound familiar? Yet it’s here that Dishonored 2 departs from its predecessor. Players are given the choice of either Corvo or Emily, with both wielding the supernatural powers that made the first game so enjoyable — Corvo favors strength and can manipulate the world around him, Emily is stealthier and uses darker, more human-focused powers.

Choice is a key theme throughout Dishonored 2. Whichever character you choose (you’re locked in for the entirety of your playthrough), how you proceed through the game is entirely up to you. The karma-based Chaos system returns, measuring the relatively morality of your actions at the end of each of the game’s nine missions, though it’s much less black and white than the old game. Kills won’t instantly penalize you — ignore innocents and leave hapless guards alive, only take out the main target or particularly evil side characters, and you won’t be rendered an immoral beast after all is said and done. The story’s conclusion and certain aspects of the world change depending on how much Chaos you’ve accrued, which enhances the need to give Dishonored 2 multiple playthroughs, and it’s a fairer system in its second outing.

Personally, I favored stealth and minimal kills. First time out, I picked Emily, and was quickly reminded of just how fluid Arkane’s control scheme is. After escaping the capital city of Dunwall, players are taken to the Southern Europe-inspired Karnaca, where you’ll try to work your way back and eventually reclaim Emily’s throne. That requires advancing through nine massive, sprawling, densely-packed sandboxes. In each, players are handed a glut of tools and skills, assigned a number of targets, and then left to their own devices. It’s a freedom that is entirely welcome and all too rare in a world of hand-holding and forced-narrative corridor shooters.

With guns, a sword, a bow and arrow and incredible powers, plus the openness of Dishonored‘s level design, there are countless variations as to how each mission plays out. Emily, for instance, can use Far Reach to climb up to higher ledges. From there, use Doppleganger to conjure a clone and send it into a gaggle of guards. As they frantically try to slice the being to pieces, use Domino — which can select multiple targets — and then sneak up behind a guard. Sink your knife into him (or put him to sleep, low chaos players) and every targeted guard will suffer the same effect — Domino, it transpires, is one of the truly inspired new additions to the game’s arsenal.

Don’t think that Dishonored‘s AI can be easily overcome, however. That’s a violent mistake many will make early in the game, particularly on higher difficulty levels (unless you’re exceptionally good, the highest difficulty will repeatedly leave Emily or Corvo riddled with bullet holes and knife wounds). The systems at work here are intelligent and require constant thought and planning. This isn’t a game that allows for silly mistakes — leaving an unconscious body out in the open, or a locked door ajar, for instance — nor will it allow for those who run in gung ho. Yes, Corvo can summon a plague of rats, but that in no way guarantees that you can take down a room of guards with ease.

While the gameplay is as exhilarating as ever, Dishonored is also something of a technical marvel. First time around it was visually impressive, but the game’s lighting engine was the true star of the show. In sun-soaked Karnaca, light gleams on stonework and glass, while shadows — an essential part of any stealth game — are inky black. It highlights the lived-in, beautifully detailed, nineteenth century steampunk aesthetic of Dishonored‘s dystopian world to an even greater extent than its first outing, which is no mean feat.

While it’s far from a perfect game — the ending once again lands with a thud, the story is all-too familiar, and I experienced a number of glitches and bugs, usually moving into and out of cutscenes — Dishonored 2 is undoubtedly an exceptional one. Everything that made the first title such an essential purchase is here, but is compounded by greater choice, more gameplay mechanics, wonderful level design (the constantly shifting Clockwork Mansion is a particular highlight) and even more beautiful visuals. The run-up to the holidays always brings a wealth of new games, but if you can carve out a dozen or so hours, Dishonored 2 is an absolute must.

Dishonored 2 is available now on PC, PS4 and Xbox One. 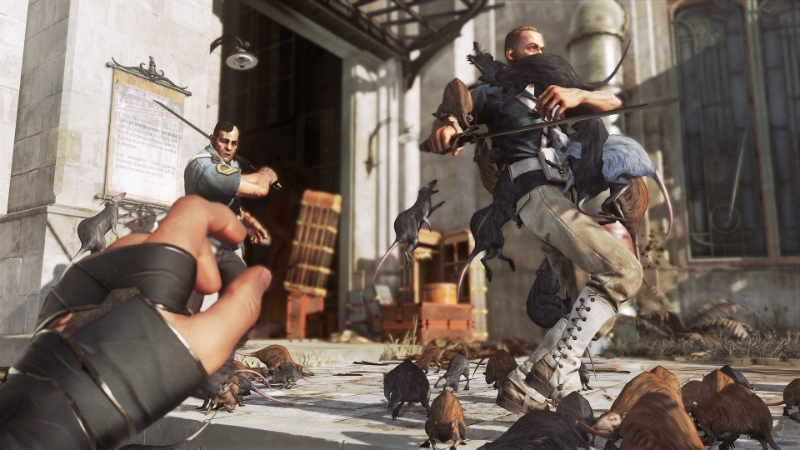