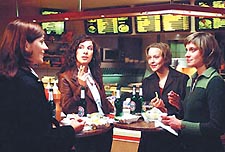 BEAUTIFUL WOMEN IS somewhat like a German, all-female Big Chill, without the long history between the characters. They're a group of actresses who meet at an audition and end up spending a day and night together, exploring their emotions and dealing with controversy when it arises. One of the actresses is so depressed about her inert relationship with her boyfriend that the others seek to console her. ”So climb a mountain,” advises the lesbian character. ”I did that once when I was really down. From way up there, the world looked like a fly dropping. Suddenly I realized I was one of many, and the pain was much easier to bear. But you have to get there yourself, because there's no such thing as a chairlift catharsis.”

So they find a mountain to climb — but do so by car, ending up hungry and without lodging late at night. The women stop at a hotel in the middle of nowhere that's technically closed for the season but is being used by two performers practicing for the show they'll give later in the year. The lesbian's advice for the woman with boyfriend troubles later turns harsh when she says, ”You remind me too much of my girlfriend.” The despairing woman answers, ”What about her?” — to which the lesbian replies, ”She's getting dumped too.”

In addition to the strong lesbian character who's out from the very start of the film, an additional Sapphic plot unfolds as the film progresses. The characters are complex and fascinating, the women are beautiful, and the story empowering.