The Lady in Question is Charles Busch

DESPITE CONVENTIONAL WISDOM, some gay people have no stomach for drag, camp, divas or the stage. Don’t let that stop you from checking out The Lady in Question is Charles Busch. The conventionally gay won’t need any persuading — they’ve likely all got tickets already. 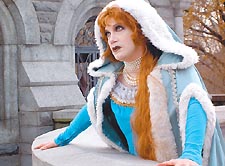 Busch, whose professional persona really started taking shape in the mid ’80s in the East Village’s Theatre in Limbo, is an icon. You may not realize that, but you will after seeing this documentary that follows Busch’s life from Pampers to present. This film follows the recent The Nomi Song, a chronicle of gay New Wave pioneer Klaus Nomi, one of the first celebrities to die of AIDS-related illness (in 1983). As that film captured the gay-influenced cutting edge of what was happening in the in Manhattan of the late ’70s and early ’80s, The Lady in Question continues the tale. Busch’s play Vampire Lesbians of Sodom play was the playwright/actor’s first step in making camp sensibility accessible to the rest of America.

Filmmakers John Catania and Charles Ignacio are thorough in explaining Busch to audiences, whether they’re already fans or meeting Busch for the first time. And they’ve pulled together remarkable clips from those first Limbo performances. Catania and Ignacio have constructed their biopic in a way that is utterly engaging for a fairly broad audience. There are laughs, tears and cultural insight, and a fast pace that keeps viewers engrossed and entertained. These filmmakers have also backed up their content with technical acumen. There is no questioning the vibrant professionalism that went into making The Lady in Question.

Forget the song and dance. Anyone with an appreciation for gay history, or pluck, or just plain talent, will be cheering for this lady.

The Lady in Question is Charles Busch