The decision of the House Republican leadership on March 9 to authorize the House counsel’s defense of the Defense of Marriage Act in court prompted questions from Minority Leader Nancy Pelosi (D-Calif.) about the cost of the defense and new polling from the Human Rights Campaign suggesting the American people oppose such action.

Democrats in both chambers of Congress, meanwhile, plan to introduce legislation on Wednesday, March 16, to repeal DOMA and add additional federal protections for same-sex couples who marry in one state and move to another where their marriage is not recognized. 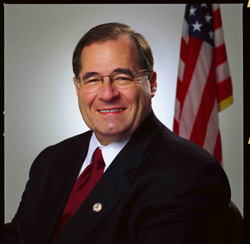 In the House, Rep. Jerrold Nadler (D-N.Y.), who was the lead sponsor of the Respect for Marriage Act (RMA) in the 111th Congress, is to be joined by all four out gay representatives – Barney Frank (D-Mass.), Tammy Baldwin (D-Wisc.), Jared Polis (D-Colo.) and David Cicilline (D-R.I.) – aand Rep. John Conyers (D-Mich.) to announce the House introduction of the RMA in the 112th Congress. According to a news release, the RMA has more than 100 co-sponsors in the House.

Frank’s decision to co-sponsor the bill this year is notable because he did not co-sponsor it in the 111th Congress. One of the reasons why he did not was the bill’s “certainty provision,” which guarantees that the federal government will continue to recognize a same-sex couple legally married in one state if the couple moves to a state where same-sex marriages are not recognized. Frank said in 2009 that the provision would “stir up unnecessary opposition with regard to the question of are you trying to export it to other states.”

Frank said then that another reason for his opposition was that passage of the bill was “not anything that’s achievable in the near term.” This year, however, Frank is on board — even though Republican control of the House makes movement in that chamber even less likely than in the 111th Congress.

In fact, no Republicans are slated to be on board as con-sponsors of the RMA on Wednesday, the deputy executive director of Log Cabin Republicans, Christian Berle, told Metro Weekly this evening. He added, however, “I am confident that there will be a Republican on the House, and potentially the Senate bill, this year.”

The Bipartisan House Legal Advisory Group (BLAG), by a 3-2 vote over the objections of Pelosi and Rep. Steny Hoyer (D-Md.), had directed the House general counsel this past week to defend the 1996 law that would be repealed by the RMA. Those supporting the defense were Speaker John Boehner (R-Ohio), Majority Leader Eric Cantor (R-Va.) and Rep. Kevin McCarthy (R-Calif.).

On Tuesday, March 15, however, HRC released new polling conducted in partnership with Greenberg Quinlan Rosner Research, that showed a majority of Americans oppose DOMA, which the survey question described as “the law banning federal recognition of legal marriages” between “gay and lesbian couples.” Fifty-one percent of respondents said they oppose the law, while 34 percent of respondents support it.

The polling question refers to Section 3 of DOMA, which is the portion of DOMA under challenge in several lawsuits and that the Department of Justice, on Feb. 23, announced it would no longer defend in court. Section 2 of DOMA, which purports to prevent states from having to recognize same-sex marriages legally performed in other states, was not referenced in the poll’s description of DOMA.

Despite this changed public opinion about DOMA, the House leadership voted to move forward with a defense of Section 3 of the law. In a letter sent to Boehner on March 11 about that defense, Pelosi asked for more information about its specifics.

LCR executive director R. Clarke Cooper said in a statement that it should not be surprising that “Congress has decided to exercise its legal right, and some would say duty, to defend the law,” but added, “We are confident that this law will ultimately be overturned despite any defense presented by House counsel, and will continue to work with our allies in Congress to advocate for legislative repeal.”

GOProud board chairman Chris Barron made a similar point, telling Metro Weekly, “[C]onsidering Congress passed DOMA, it’s entirely appropriate for Boehner and the House to step in and defend the law as Constitutional. We disagree about the need for DOMA but we certainly understand and respect the role each branch of the government plays.”

Announcement coincides with the 10-year anniversary of the official repeal of the 1990s-era ban on LGBTQ service members.

As it marks the tenth anniversary of the repeal of the now-defunct "Don't Ask, Don't Tell" policy that barred LGBTQ individuals from serving openly in the U.S. military, the Biden administration has announced that discharged veterans may soon be able to receive full benefits from the U.S. Department of Veterans Affairs.

"Today, we are also taking steps to clarify VA policy for Veterans who were given other than honorable discharges based on homosexual conduct, gender identity or HIV status," Kayla Williams, an assistant secretary for public affairs in VA's Office of Public and Intergovernmental Affairs, wrote in a blog post published Monday on the VA website. "Under this newly-issued guidance, VA adjudicators shall find that all discharged service members whose separation was due to sexual orientation, gender identity or HIV status are considered 'Veterans' who may be eligible for VA benefits."