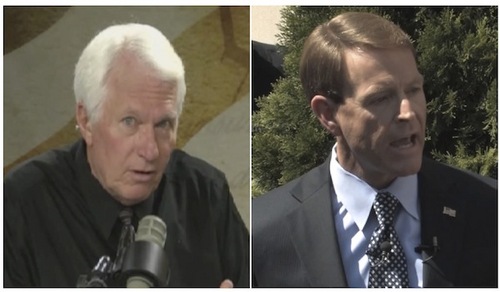 While the Boy Scouts of America finally closed the door on discrimination against gay youth yesterday, anti-gay leaders have said lifting the ban will be the death of the 103-year-old organization.

“Sadly, the Boy Scouts’ legacy of producing great leaders has become yet another casualty of moral compromise,” said Family Research Council President Tony Perkins in a statement. “Unfortunately, Boy Scout delegates capitulated to strong-arm tactics and abandoned the timeless values that have served the organization well for more than 100 years.”

According to Perkins, who showered praise on the BSA a little less than a year ago when the organization upheld their longstanding discriminatory ban on gay members and leaders, yesterday’s vote to lift the ban was the result of weak BSA leadership.

“It is clear that the current BSA leadership will bend with the winds of popular culture, and the whims of liberal special interest groups. There is little doubt that God will soon be ushered out of scouting. Now is the time for new leadership,” stated Perkins. “In the meantime, we will stand with those BSA Councils who will now act to protect boys from a new policy that only creates moral confusion and disrespects the views of the vast majority of Scouting parents.”

More than 60 percent of the 1,400 members of the BSA’s 270 councils voted yesterday to approve a resolution backed by BSA leadership to lift the ban on gay youth under the age of 18. The ban on gay adult leaders was not considered and will remain in place.

According to Brian Brown of the National Organization for Marriage, which, unlike the FRC, played little role in the debate over the ban the past several months, the vote is the “beginning of the end for what once was one of America’s noblest organizations.”

“Their decision to admit openly gay scouts will end up sexualizing the organization. I am certain that having changed their policy on homosexuality, it’s only a matter of time before courts order them to admit homosexual scout leaders,” Brown said in a statement. “Meanwhile, countless thousands of churches will very likely pull their sponsorship rather than endorse homosexuality, and the entire organization will begin to collapse.”

Advocates have vowed to continue to fight the remaining ban on gay adult leaders, stating that the message it sends to youth — that it is only acceptable to be a gay Scout until the age of 18 — is highly damaging. The BSA, however, have stated they consider the matter closed.

The Mormon Church, which is the largest sponsor of Scout units, said in a statement released after yesterday’s vote that they were “grateful to BSA for their careful consideration of these issues.”

“We appreciate the positive things contained in this current proposal that will help build and strengthen the moral character and leadership skills of youth as we work together in the future,” the statement read.

Taking to Twitter, Bryan Fischer of the American Family Association called on the Mormon Church to cut ties with the BSA. Later, Fischer questioned if the leadership of the church “may support gay Scouts because advancing the gay agenda may lead to the return of polygamy.”

“BSA now stands for Boy Sodomizers of America, because that’s what will happen. Mark my words,” Fischer tweeted. 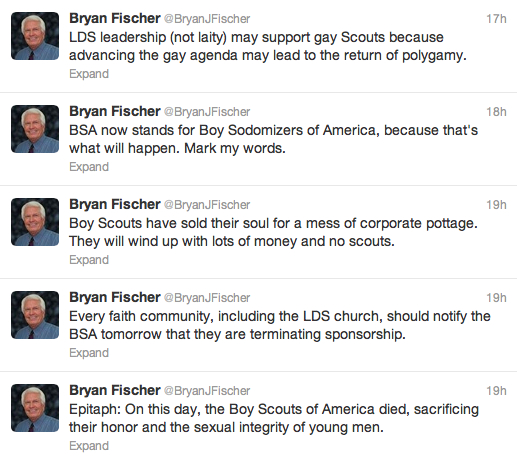