Del. Heather Mizeur (D-Montgomery), one of eight openly LGBT members of the Maryland General Assembly, stunned political observers Saturday by placing second in a straw poll of Western Maryland Democrats, demonstrating she could be a formidable candidate in the race for the next governor of Maryland. 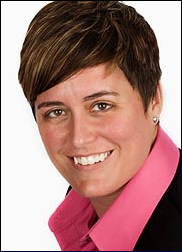 At the informal gathering of Democrats in Hagerstown, Mizeur earned 37 votes, or about 27 percent of 142 votes cast, in the Western Maryland Democratic Summit straw poll for governor. She placed behind current Lt. Gov. Anthony Brown, who earned 62 votes, or 44 percent, and ahead of Attorney General Doug Gansler, who earned 25 votes, or 18 percent, and Howard County Executive Ken Ulman, who earned 17 votes, or 12 percent. Only one vote was cast for U.S. Rep. C.A. “Dutch” Ruppersberger, a Baltimore-area congressman who represents parts of southern and eastern Baltimore County and Harford County.

In an email to supporters, Joanna Belanger, campaign manager for the candidate committee Friends of Heather Mizeur, touted Mizeur’s second-place finish in the straw poll and solicited donations. Last Thursday, prior to the straw poll, Belanger had sent out another email citing an article published in The Baltimore Sun that mentioned the other four potential candidates for governor – no one has officially announced yet – but omitted Mizeur, in which columnist Dan Rodricks called the governor’s seat “the big-daddy chair.”

“Sometimes you really have to wonder if these folks realize that it’s 2013 now, and that women won’t be ignored and dismissed,” Belanger wrote in the first email, adding, “We deserve and demand better” before asking Mizeur supporters to sign a petition stating their support by “send[ing] a message that Maryland isn’t a boys’ club – and there’s no such thing as the ‘big-daddy chair.'”

From a political standpoint, Mizuer’s finish in the straw poll is significant as the bulk of the candidates will be competing for votes in Montgomery and Prince George’s counties, meaning establishing a base of support in Western Maryland and other regions outside of the Capital Beltway could prove crucial to whether Mizeur is able to galvanize enough supporters to set her on the path to becoming the state’s first female and first out governor.

Even if she doesn’t eventually run for governor, showing some degree of political strength or an ability to carry votes among certain segments of voters – such as women, LGBT voters or those from Western Maryland – could make her a political kingmaker in the Democratic primary, or a strong candidate for lieutenant governor as part of a joint ticket with one of the other candidates, such as Gansler.