By Randy Shulman on November 7, 2014 @RandyShulman 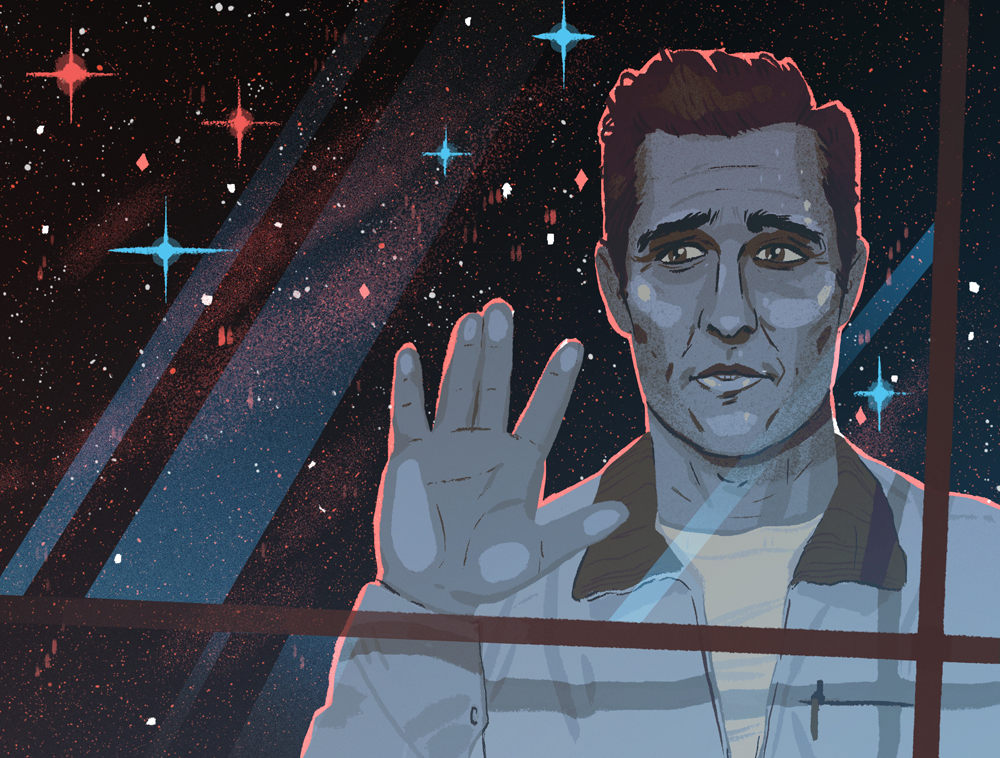 If 2001: A Space Odyssey and Contact had an offspring, it would be Interstellar. Its grandfather would be Lawrence of Arabia and its grandmother, Escape from the Planet of the Apes, because that particular oddity from 1971 is the matron of all time paradox movies — movies that can’t decide which came first, the chicken or the egg, so they settle on a light scramble and hope we discuss things until we collapse from exhaustion and no longer care.

It may sound as if I didn’t like Interstellar, but that’s not the case. I loved it. Christopher Nolan’s sweeping epic is bold, super-sized, and demands to be watched on the biggest screen possible paired with a thundering sound system that rumbles your internal organs to the point where you think they might have shifted places. It’s the kind of movie after which you get up from your seat, stumble around aimlessly for a moment, look at your companion and mutter, “What just happened?” You then spend the next few days trying to sort it out, especially one key bit that calls to mind that aforementioned chicken and egg syndrome, and is the reason why time paradoxes in movies often throw filmmakers off their game. It sometimes a result of that singularity known as a black hole. Directors who encounter them — or, rather, write them into their screenplays — can’t resist imagining what lies within. And typically what happens is they write themselves into a literal corner, putting all sense and sensibility on hold, while deploying a veritable army of special effects experts to carry the weight.

Christopher Nolan is too smart for all that. He actually finds meaning in Interstellar’s black hole Gargantua. An adventurous filmmaker and a deeper thinker than most (his films are threaded with rich philosophical ponderings that one can take or leave), Nolan allows himself an out that helps to explain a fairly massive bump in the narrative. Yet, for all its sci-fi trappings — and there are some wonderful, surprisingly understated sci-fi trappings on offer — Interstellar comes down to one thing, and one thing alone: the notion of following your heart.

Yes, it really is that simple.

Even if their heart changes course along the journey, even if the motive held within their heart isn’t fully selfless or noble, and sometimes duplicitous to the point of dangerous, every major character in Interstellar follows his or her own heart.

For those of you who have already seen the film, you know what I’m referring to. For those who haven’t, I’m not spoiling a thing for you here. Part of the joy of watching Interstellar is to be swept up in its ability to surprise, even at those instances where you think to yourself, “Something awful is about to happen.”

The premise is fairly straightforward. The world has been ravaged by over-farming — resulting in famine and punishing, cataclysmic dust storms — and humanity survives by a thread on the only durable crop left: corn.

Matthew McConaughey stars as Cooper, a former ace pilot and now full-time corn farmer, who, thanks to cryptic communications from an otherworldly source which his ten-year-old daughter Murph (the wonderful Mackenzie Foy) deciphers, is lead to a secret enclave (in a lovely homage to Close Encounters of the Third Kind). Here, a group of scientists have a plan to save the human race by finding a new home for us in another galaxy, thanks to the emergence of a wormhole near Saturn, placed there by … well, no one is quite sure who placed it there. But “they” are reaching out to us, clearly. Either “they” want to save us or they see us as “Soylent Green.”

Twelve viable planets exist out there, found by previous, single-manned scouting parties, and Cooper is recruited to pilot a ship to the most promising among those to see if life can indeed be colonized. There’s a lot of talk about gravity and the relativity of time (which does eventually come into play in an ingenious yet alarming way), but most of this is the stuff of Macguffins. Nolan, who co-wrote the film with his brother, Jonathan, is shrewd enough to stoke the science embers, but also realizes that at some point the narrative blaze has to be supplanted by action and momentum, cause and effect. Which is why the deeper scientific questions posed by Interstellar are essentially moot and turn out to be plot-driving devices rather than deeper philosophical musings a la 2001. The science may be valid, but the film’s core lies squarely in the emotional, propelled chiefly by the separation of Cooper from Murph, who eventually grows up into the very stunning and very scientifically capable Jessica Chastain. Cooper promised to reunite with his daughter and by God he’s going to honor that promise come high water (very high water) or, well, does ice count as Hell?

Reuniting with a family member might seem like thin stuff to hang a three-hour movie on, but Nolan broadens the scope of his narrative to keep us nourished throughout. There are some positively thrilling set pieces — nothing we haven’t seen before, but it doesn’t matter when something is directed as brilliantly as this. The film’s auxiliary themes deal with the intensely destructive nature of the elements, relayed by Nolan in massive strokes. Earth, water, ice and fire all play a hugely significant role at one point or another in propelling the plot, as does, later in the film, the nature of time and space. Einstein would be proud.

McConaughey is in full-throttle stoic mode, a part he wears comfortably by now. Interstellar may not win him his second Oscar, but it further cements his Hollywood stature as a genuinely capable leading man. Anne Hathaway, on the other hand, just might get an Oscar for her compelling, heartfelt performance as a scientist on the mission who exemplifies the movie’s central theme. A few veterans — Michael Caine (chewing less scenery than usual), Ellen Burstyn and John Lithgow — crop up in notable roles. And Bill Irwin is a scene-stealer as TARS, a rather unique robot with a wry sense of humor.

Nolan has released Interstellar in six formats, including 70mm film — which has pretty much gone the way of the dinosaur as theatres abandon traditional projectors for digital. It’s a strange move on his part, but an appreciated one nonetheless. In our area, Interstellar can be seen in its pinnacle format — 70mm IMAX film — at the Lockheed Martin IMAX Theater in the Smithsonian’s National Air & Space Museum and at the Smithson’s Steven F. Udvar-Hazy Center in Dulles. This is, quite arguably, the best theatre in the country to view it in, and worth whatever upcharge you have to pay. The screening I saw was in IMAX Digital, a worthy alternative, and the boost in sound alone is worth the extra charge — as long as you can get past Hans Zimmer’s horrific, organ-driven score, one of the most abysmal movie scores in recent memory.

I loathe calling something an instant classic. And yet, Interstellar is just that. Forget for a moment about saving humanity, Interstellar points the way to saving movies. It gets us out of our homes,  wrenching us from our streaming content, by putting on a really, really, really big show on the most massive screen possible. It leaves us awestruck.

) is now playing at area theaters.

Randy Shulman is Metro Weekly's Publisher and Editor-in-Chief. He can be reached at rshulman@metroweekly.com.
← Previous Story Review: “The Way He Looks”
Next Story → The Hunger Games: Mockingjay, Part 1 (review)