White House press secretary Jay Carney announced today that President Barack Obama supports the Respect for Marriage Act, a bill to repeal the Defense of Marriage Act that will have its first Senate hearing on July 20. In response to a question from Metro Weekly, Carney said Obama is “proud to support” the bill that “would take DOMA off the books once and for all.” 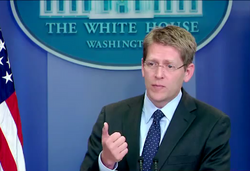 Metro Weekly also asked about the current status of Obama’s discussions with senior military leadership regarding the certification of “Don’t Ask, Don’t Tell” repeal, but Carney said he didn’t have any new information on that front.

Metro Weekly: The president has said in the past that he opposes the Defense of Marriage Act, but he is yet to endorse the Respect for Marriage Act, which is the specific piece of legislation —

Metro Weekly: — aimed to repeal the bill. Tomorrow, the Senate will hold the first hearing into that bill. Is the administration ready to endorse that bill?

Carney: I can tell you that the President has long called for a legislative repeal of the so-called Defense of Marriage Act, which continues to have a real impact on the lives of real people — our families, friends and neighbors. He is proud to support the Respect for Marriage Act, introduced by Sen. Feinstein and Congressman [Jerrold] Nadler [(D-N.Y.)], which would take DOMA off the books once and for all. This legislation would uphold the principle that the federal government should not deny gay and lesbian couples the same rights and legal protections as straight couples.

Metro Weekly: A follow-up. In line with that, the administration is also still in court defending “Don’t Ask, Don’t Tell.” When is — Tomorrow, also will be three weeks since the President said that certification will come in “weeks, not months.” Has the President spoken with Secretary Panetta or Adm. Mullen about the certification since he made that statement, and where does it stand?

Carney: I don’t know if the President has had those conversations either with Secretary Panetta or his predecessor or Adm. Mullen. What the president said remains the case and our expectation, but I don’t have any more information for you on that.

Watch the video of the exchange.

Metro Weekly will have more to come on this development.

COMPARE: The White House view on DOMA in 1996, from the memorandum discussed in part two of the Metro Weekly series on the history of DOMA: MemoToClinton.pdf